The Fox and the Cat (fable) facts for kids

Kids Encyclopedia Facts
This page is about the fable. For the characters in The Adventures of Pinocchio, see The Fox and the Cat. 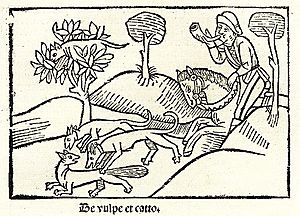 Heinrich Steinhöwel's 1501 illustration of the fable

The Fox and the Cat is an ancient fable, with both Eastern and Western analogues involving different animals, that addresses the difference between resourceful expediency and a master stratagem. Included in collections of Aesop's fables since the start of printing in Europe, it is number 605 in the Perry Index. In the basic story a cat and a fox discuss how many tricks and dodges they have. The fox boasts that he has many; the cat confesses to having only one. When hunters arrive with their dogs, the cat quickly decides to climb a tree, but the fox thinks of many ways without acting and is caught by the hounds. Many morals have been drawn from the fable's presentations through history and, as Isaiah Berlin's use of it in his essay "The Hedgehog and the Fox" shows, it continues to be interpreted anew.

The Hedgehog and the Fox

The main difference from the version of the fable with a hedgehog is that the contrast in the ancient version is between flight and defence rather than between strategies of flight, as in the cat and fox version. In early Renaissance times, the writer Laurentius Abstemius questioned whether the cat's instinctive solution is ultimately better than the fox's ingenuity by rewriting the fable as De lepore sese vulpi praeferente ob pedum velocitatem (a hare preferring itself to the fox on account of its fleetness). While the hare vaunts itself on its superior speed, the fox points out that its own slyness has been a better means of survival. The author sums up by saying that intelligence is the better quality.

The question has remained open and the different behaviours have been reinterpreted in other ways since. In his essay "The Hedgehog and the Fox", originally written in 1953, the philosopher Isaiah Berlin uses the fable as summed up by Archilochus to divide writers and thinkers into two categories: hedgehogs, who view the world through the lens of a single defining idea; and foxes, who draw on a wide variety of experiences and for whom the world cannot be boiled down to a single idea. The essay, though not meant too seriously by Berlin, has proved influential, with a number of writers using his distinction.

Stephen Jay Gould's anthology The Hedgehog, the Fox, and the Magister's Pox uses both Berlin's book and the fable in exploring the complex relationship between the sciences and the humanities. Gould sees Archilochus's original image as containing two levels of metaphorical meaning for human contrasts. "The first speaks of psychological styles... Scramble or persist." The second is a question of intellectual practice: "Diversify and color, or intensify and cover", a union of the two strategies being the most fruitful for understanding between the two disciplines.

The abstract sculptor Richard Serra also cites Isaiah Berlin's essay as the source of the title of his The Hedgehog and the Fox (1999), in the grounds of Princeton University. Serra explained at the time of the sculpture's installation, "It points to how scholars either become free thinkers and invent or become subjugated to the dictates of history. This is the classical problem posed to every student." His reading therefore reverses the moral order of the original fable. The hedgehog, being resistant to change, is intellectually dead; the fox's adaptability (demonstrated by sculpture's relationship to its environment) is the correct strategy for intellectual development and survival.

All content from Kiddle encyclopedia articles (including the article images and facts) can be freely used under Attribution-ShareAlike license, unless stated otherwise. Cite this article:
The Fox and the Cat (fable) Facts for Kids. Kiddle Encyclopedia.