The Fox and the Cat facts for kids

Kids Encyclopedia Facts
This page is about the characters in The Adventures of Pinocchio. For the fable, see The Fox and the Cat (fable).

The Fox and the Cat (Italian: Il gatto e la volpe, the names' sequence is reversed as gatto means 'cat' and volpe means 'fox') are a pair of fictional characters who appear as the main antagonists in the 1883 book The Adventures of Pinocchio (Le avventure di Pinocchio) by Italian writer Carlo Collodi. Both are depicted as con-men, who lead Pinocchio astray and unsuccessfully attempt to murder him. The pair pretend to sport disabilities; the Fox lameness and the Cat blindness. The Fox is depicted as the more intelligent of the two, with the Cat usually limiting itself to repeating the Fox's words. The Fox and The Cat served as the main antagonists of the story.

Role in the book

The Fox and the Cat illustrated by Carlo Chiostri

Pinocchio encounters the two after leaving Mangiafuoco's theatre with five gold coins, whereupon the Fox claims to know Pinocchio's father Mister Geppetto and proposes to Pinocchio to visit the Land of Barn Owls (Paese dei Barbagianni) and thence to a 'Field of Miracles' (Il campo dei Miracoli), where coins can be grown into a money-producing tree. A white blackbird warns Pinocchio against these lies, but is eaten by the Cat. The Fox covers up this action by claiming that the blackbird talks too much. The pair lead Pinocchio to the Red Lobster Inn (Osteria del Gambero Rosso), where they eat a large meal and ask to be awoken at midnight.

Two hours before the set time, the pair abandon Pinocchio to pay for the meal with one of his coins, and have the innkeeper leave a message for Pinocchio that the Cat's eldest kitten had fallen ill, and that they would meet Pinocchio at the Field of Miracles later. When Pinocchio leaves the inn, the two attack him in the guise of murderers and in the ensuing struggle, Pinocchio bites off the Cat's paw. The murderers then hang Pinocchio from a tree, which he escapes with the assistance of The Fairy with Turquoise Hair, who enlisted a falcon to cut him down.

The next day, Pinocchio encounters the pair again, unaware that they are the murderers who tried to hang him. When Pinocchio notices the Cat's paw in a sling, the Fox claims that the Cat cut it off to feed a starving wolf. They lead Pinocchio to the town of Catchfools (Acchiappacitrulli), where the coins are soon buried. In Pinocchio's absence, the pair dig up the coins and escape. Pinocchio learns of this from a parrot, who mocks him for falling for their tricks.

Near the end of the book, Pinocchio encounters the Fox and the Cat again when looking for a place for Geppetto to recuperate. This time, the pair have become impoverished, whereas the Fox is now truly lame, nearly hairless, and tailless (the Fox had to chop off his own tail to sell for money), and the Cat truly blind. They plead for food or money, but are rebuffed by Pinocchio while stating that it serves them right for their wickedness. He then leaves, all the while saying goodbye to his 'false friends'. 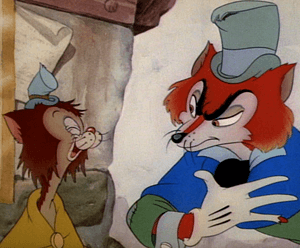 In the 1940 Disney film Pinocchio, the Fox and the Cat are given the names John Worthington Foulfellow (or "Honest John"; voiced by Walter Catlett) and Gideon (whose hiccups were provided by Mel Blanc and whose mute comic hijinks were modeled on Harpo Marx, the silent member of The Marx Brothers). The pair differ from the original characters in a number of ways; they do not feign disability and they persuade Pinocchio to join the puppet show (instead of Pinocchio discovering it himself) as well as go to Pleasure Island, upon being hired to do by The Coachman. They also do not attempt to murder Pinocchio, although Foulfellow suggests to the Coachman in one scene that they would be willing to murder if required as part of a job. The Field of Miracles subplot is also absent from the film. Foulfellow is portrayed as an eccentric ham actor who appears to be illiterate, whereas Gideon is portrayed as a foolish mute who frequently gets Foulfellow into trouble on accident. Apart from three hiccups, Gideon is mute throughout the film. A draft script of the film had Foulfellow and Gideon being arrested by the police after encountering Pinocchio a third time, but this scene was written out of the film's final draft for unknown reasons. The characters were considered to be used again in the Disney film Fun and Fancy Free (1947) as the owners of the Magic Beans that Mickey Mouse acquires in exchange for his cow, but the idea was dropped.

In the video game of Pinocchio, Foulfellow appears as an enemy during the first stage. The duo were also planned to make an appearance in the RPG video game Kingdom Hearts 358/2 Days (2009), but were cut for space restrictions.

In the Disney book Pinocchio's Promise, Foulfellow and Gideon see Pinocchio walking into town to give a cuckoo clock to Geppetto's friend Mrs. Ramono, whereupon he is diverted to a circus. Foulfellow attempts to sell the clock elsewhere, while Gideon takes Pinocchio to the circus with two expired tickets, but abandons the boy when the latter is scolded by the admission attendant. After Pinocchio leaves the circus and reports Foulfellow's trickery to the local police, Foulfellow is then arrested and Pinocchio gives the clock to Mrs. Ramono.

In a Disney book adaption of the tale The Emperor's New Clothes, Foulfellow and Gideon - posing as tailors - trick the emperor (portrayed in the same book by Prince John).

Gideon and Foulfellow also appear in the fifth installment of the book series The Kingdom Keepers. They are featured as members of the Disney Villains legion known as the Overtakers, and battle Finn in chapter six of Shell Game.

All content from Kiddle encyclopedia articles (including the article images and facts) can be freely used under Attribution-ShareAlike license, unless stated otherwise. Cite this article:
The Fox and the Cat Facts for Kids. Kiddle Encyclopedia.