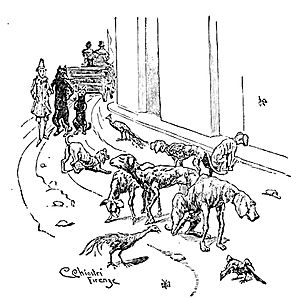 Pinocchio on the streets of Catchfools as the hairless dogs and the bedraggled pheasants are seen.

Catchfools (Italian: Acchiappacitrulli) is a fictional location in the Italian novel The Adventures of Pinocchio (1883).

It is a city where every animal in town has done something exceedingly foolish and now suffers as a result. The leader of Catchfools is a young unseen emperor. Outside of the city is the so-called Field of Miracles (Italian: Il campo dei Miracoli).

Pinocchio encounters The Fox and the Cat after leaving Mangiafuoco's theatre with five gold coins. The Fox claims to know Pinocchio's father Geppetto and proposes to Pinocchio to visit the Land of Barn Owls (Italian: Paese dei Barbagianni) and thence to a Field of Miracles, where coins can be grown into a money-producing tree. They convince him that if he plants his coins in the field, they will grow into a tree with gold coins.

Pinocchio finally reaches Catchfools with the Fox and the Cat. As he travels through the streets of Catchfools, Pinocchio sees that the streets are filled with hairless dogs yawning from hunger, sheared sheep trembling with cold, chickens with no combs and wattles begging for a grain of wheat, large butterflies unable to use their wings because they sold all their lovely colors, tailless peacocks ashamed to show themselves, and bedraggled pheasants scuttling away hurriedly and grieving for their bright feathers of gold and silver lost to them forever. Out of those paupers and beggars, Pinocchio also sees that there are beautiful coaches containing either foxes, thieving magpies, or nasty birds of prey.

Upon reaching the Field of Miracles, Pinocchio buries his coins, uses water from the canal to pour over it, and then leaves for the "twenty minutes" that it will take for his gold to grow. After Pinocchio leaves, the Fox and the Cat dig up the coins and run away.

Once Pinocchio returns, he learns of the Fox and the Cat's treachery from a parrot who mocks Pinocchio for falling for their tricks. Pinocchio rushes to the Catchfools courthouse to report the theft of the coins to a gorilla judge. Although he is moved by Pinocchio's plea, the judge sentences Pinocchio to four months in prison for the crime of "foolishness." Pinocchio is taken away by two Mastiff Gendarmerie that the judge summoned and held their hands over Pinocchio's mouth to save time.

Fortunately for Pinocchio who spends some time in prison, all criminals are released early by the jailers when the Emperor of Catchfools declares a celebration following his army's victory over the town's enemies. Upon being released by stating to the jailer that he is a criminal, Pinocchio leaves Catchfools and heads back to The Fairy with Turquoise Hair's house in the forest.

All content from Kiddle encyclopedia articles (including the article images and facts) can be freely used under Attribution-ShareAlike license, unless stated otherwise. Cite this article:
Catchfools Facts for Kids. Kiddle Encyclopedia.