The Gate, Newcastle facts for kids

The Gate is a retail and leisure complex in Newcastle upon Tyne, England.

The venue takes its name from the street on which it stands, Newgate Street. It is part of the historic Grainger Town area of Newcastle. It was opened on 28 November 2002.

The Gate has 19 venues spread across three floors, including a 16-screen Empire Cinema and Aspers Casino. The Gate is also next to Newcastle's Chinatown; there is an entrance on Stowell Street. The Gate building was built to replace the 35-year-old, 7-storey Newgate House, which was home to the prolific music venue; The Mayfair club. Mood Bar opened on 28 November 2002, the same time as The Gate.

The 19,235 m², £80 million venue was built by Land Securities and the 12m tall sculpture outside, "Ellipsis Eclipses" was designed by Danny Lane. The 24 metre high glass façade was designed by Space Decks Limited. The Odeon Cinema (now Empire) was built to replace the 71-year-old Odeon/Paramount cinema on Pilgrim Street, which after the Gate's opening remained disused until its demolition in 2017. The Gate provided 400 new jobs when opened and a further 600 during construction.

In 2004 BDP Lighting won a Lighting Design award for their work at The Gate.

The Gate won the Property Week award for Best Commercial UK Mixed-Use Leisure Scheme, and the British Toilet Association awarded The Gate a Loo of the Year Award and awarded it five stars.

In 2010 Jamie Ritblat's property company, Delancey, bought The Gate in a £900 million package of properties from PropInvest Group, in partnership with the Royal Bank of Scotland. In 2012 The Gate was sold to the Crown Estate for £60 million. 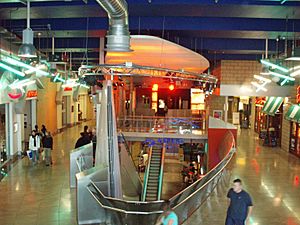 A view of the inside of the Gate showing the escalator from the ground floor to the first floor. 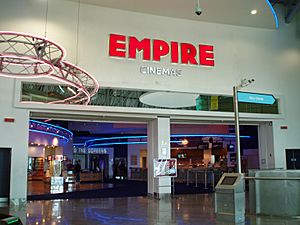 Empire Cinema at the Gate.

All content from Kiddle encyclopedia articles (including the article images and facts) can be freely used under Attribution-ShareAlike license, unless stated otherwise. Cite this article:
The Gate, Newcastle Facts for Kids. Kiddle Encyclopedia.