The Giraffe and the Pelly and Me facts for kids 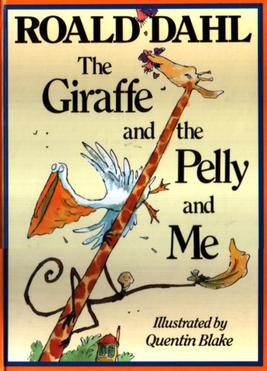 The Giraffe and the Pelly and Me is a 1985 children's book written by Roald Dahl and illustrated by Quentin Blake. The plot follows a young boy named Billy who meets a giraffe, a pelican, and a monkey, who work as window cleaners.

Although the story is narrated in first-person by Billy, the word 'me' in the title refers to the monkey, who concludes every verse of his signature song with the phrase 'the giraffe and the pelly and me'.

The story is told from the point of view of Billy, a young boy who has always dreamed of owning a sweet-shop. His ambition is strengthened by the fact that there is an abandoned building named The Grubber, an old English word for a sweet-shop, near where he lives. One day, he finds that the old building has been renovated and has become the head office for The Ladderless Window-Cleaning Company. Billy then meets its workers: A Giraffe with an extendable neck; a Pelican, or "Pelly" as he is called by the others, who has a flexible upper beak; and a singing and dancing Monkey, all of whom he quickly be friends. Having only recently arrived in England, all the animals are finding it hard to acquire the right food to feed themselves. This includes fish for the Pelican, especially his favorite salmon; walnuts for the Monkey; and pink and purple tinkle-tinkle tree flowers for the Giraffe, who happens to be a "Genarous Giraffe" and therefore can eat no food other than the pink and purple flowers of the tinkle-tinkle tree. Billy and the animals all band together when they receive a letter from the Duke of Hampshire asking them to clean the 677 windows of Hampshire House. Things go smoothly when they get there until, while cleaning the windows of the Duchess's bedroom, the Giraffe and the Monkey spot a burglar attempting to steal the Duchess's jewels. The Pelican then flies in and catches the burglar, holding him prisoner in his beak despite the burglar's attempt to shoot his way out. Soon the police arrive to arrest the burglar, whom the Chief of Police identifies as "The Cobra", one of the world's most dangerous cat burglars. As a reward for retrieving the Duchess's jewels, the Duke invites The Ladderless Window-Cleaning Company to live on his estate as his personal helpers. Since he is the owner of the only tinkle-tinkle tree plantation in England, as well as thousands of walnut trees and an enormous salmon river (thr River Hamp), all three starving animals have found the answer to their prayers. Billy's dreams also come true because the Giraffe, Pelican, and Monkey will no longer need the Grubber building; with a little help from the Duke, the Grubber is revived into the most fantastic sweet shop for miles around, and the story ends with Billy running the shop and The Ladderless Window-Cleaning Company continuing their business. Billy gives each of his new friends special gifts: to the Giraffe, a bag of Glumptious Globgobblers, to the Monkey, a bag of Devil’s Drenchers, to the Pelican, a bag of Pishlets, and to the Duke, a bag of Scarlet Scorchdroppers. The Monkey, before leaving with the others, sings a little song to Billy (thus the ending).

Relations to other Roald Dahl books

All content from Kiddle encyclopedia articles (including the article images and facts) can be freely used under Attribution-ShareAlike license, unless stated otherwise. Cite this article:
The Giraffe and the Pelly and Me Facts for Kids. Kiddle Encyclopedia.