The Hawthorns facts for kids 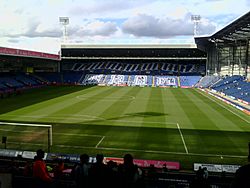 The Hawthorns is a football stadium in West Bromwich, Sandwell, England. It is the current home stadium of the West Bromwich Albion F.C.. The stadium was built in 1900 and opened in that same year. The total number of people who can seat in the stadium is about 26,500. The stadium is also near The Hawthorns station which provides transportation to the stadium. It is the highest ground above sea level in England. The four stands at the ground are called the East Stand, the Birmingham Road, the West Stand (formerly Halfords Lane) and the Smethwick End.

All content from Kiddle encyclopedia articles (including the article images and facts) can be freely used under Attribution-ShareAlike license, unless stated otherwise. Cite this article:
The Hawthorns Facts for Kids. Kiddle Encyclopedia.