The Kilns facts for kids 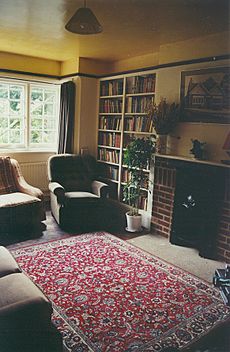 Interior view at The Kilns.

The Kilns, also known as C. S. Lewis House, is the house on the outskirts of Headington Quarry, Oxford, England, where the author C. S. Lewis wrote all of his Narnia books and other classics. The house itself was featured in the Narnia books. Lewis's gardener at The Kilns, Fred Paxford, is said to have inspired the character of Puddleglum the Marshwiggle in The Silver Chair.

The Kilns was built in 1922 on the site of a former brickworks. The lake in the garden is a flooded clay pit. In 1930, The Kilns was bought by C. S. Lewis, his brother Warren Lewis, and Mrs Janie Moore. Maureen Dunbar, Janie Moore's daughter, also lived there. C. S. Lewis wrote of the house: "I never hoped for the like". Mrs Moore was the mother of Lewis's university friend Paddy Moore, who had been killed in the First World War.

The house is located in what is now called Lewis Close, south of Kiln Lane.

The Kilns is currently owned and operated by the C.S. Lewis Foundation, who runs it as the Study Centre at the Kilns.

All content from Kiddle encyclopedia articles (including the article images and facts) can be freely used under Attribution-ShareAlike license, unless stated otherwise. Cite this article:
The Kilns Facts for Kids. Kiddle Encyclopedia.