The Lawn, Lincoln facts for kids 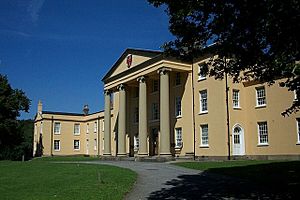 The Lawn, Lincoln, Lincolnshire, England, is a notable early nineteenth century Greek revival building designed by Richard Ingleman (who was also architect for HM Prison, Devizes). It is next to Lincoln Castle on Union Road, 0.3 miles (0.5 km) to the west of Lincoln Cathedral, and comprises a number of notable buildings, a hotel, rose garden and children's play area, set within a large lawn. The Sir Joseph Banks Conservatory is an attraction for visitors, a hothouse containing exhibits categorised by Banks on his voyages with Captain James Cook.

The main building has a substantial portico with Ionic columns. 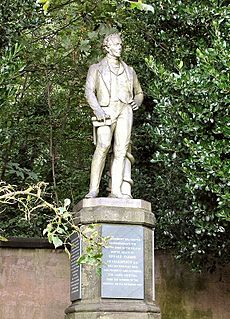 Statue of Dr Edward Parker Charlesworth, physician and life governor of the Lawn Hospital from 1820 until his death in 1853

The Lawn began its life as a lunatic asylum. After initial fundraising, the site was bought in 1809; and Richard Ingleman, architect of Nottingham Asylum, was brought in. After delay caused by indecision on the management of the asylum, independent of the county magistrates, the subscribers went ahead in 1817, and the building opened as a hospital in April 1820. The Lincolnshire County Asylum was later built (around 1854) at Bracebridge Heath. Mary Barkas worked as Medical Superintendent at the hospital between 1928 and 1933.

The Lawn continued to provide psychiatric inpatient facilities until closed by the NHS in 1985.

The City of Lincoln Council purchased the Lawn Hospital including the grounds on 13 March 1986 from The Secretary of State for Social Services for £425,000.00 and, following extensive refurbishment, the Lawn complex was officially opened on 20 November 1990. It operated as a catering and event venue under council control for some years until, in October 2011, a decision was made to sell it.

Previously the complex housed military regimental museums and a museum about the Roman colony Lindum Colonia, from which Lincoln takes its name. The main building is now run as a conference centre. The previous accommodation building for nurses and doctors is now a boutique hotel with an orangery and events area.

All content from Kiddle encyclopedia articles (including the article images and facts) can be freely used under Attribution-ShareAlike license, unless stated otherwise. Cite this article:
The Lawn, Lincoln Facts for Kids. Kiddle Encyclopedia.