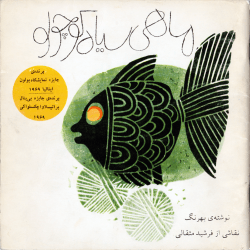 The original book cover published in 1967. The illustrations by Farshid Mesghali won several awards including the Hans Christian Andersen Award in 1974.

The Little Black Fish (Persian: ماهی سیاه کوچولو, Mâhī-ye Sīyāh-e Kūchūlū) is a well known Persian language children's book written by Samad Behrangi. The book was widely considered to be a political allegory, and was banned in pre-revolutionary Iran (prior to the 1979 revolution). Other than its notable story, the original illustrations of the book by Farshid Mesghali received the Hans Christian Andersen Award in 1974 for his "lasting contributions" as a children's illustrator. Various translations of the book have been published in multiple countries. The most recent translation of the book in English was published in 2015 with its original illustrations.

The story is told through the voice of an old fish speaking to her 12,000 children and grandchildren. She describes the journey of a small black fish who leaves the safety of the local stream to venture into the world.

The path of the little fish leads down a waterfall and along the length of the river to the sea. Along the way, the fish meets several interesting characters, including a helpful lizard and the dreaded pelican.

With both wisdom and courage, the fish travels far and the tale eventually ends with the Little Black Fish setting a lasting example for others.

All content from Kiddle encyclopedia articles (including the article images and facts) can be freely used under Attribution-ShareAlike license, unless stated otherwise. Cite this article:
The Little Black Fish Facts for Kids. Kiddle Encyclopedia.