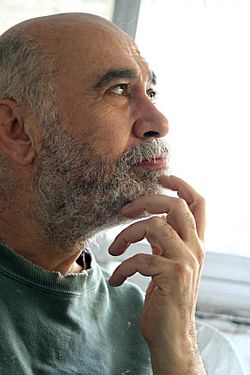 Farshid Mesghali (Persian: فرشید مثقالی , born July 1943) is an Iranian animator, graphic designer, illustrator, animator, and writer who has lived in the United States since 1986. He received the international Hans Christian Andersen Medal in 1974 for his "lasting contribution" as a children's illustrator.

Mesghali was born in Isfahan, Iran in 1943. Studying painting at Tehran University, he began his professional career as a graphic designer and illustrator in 1964. After graduation in 1968, he was supported by the Institute for the Intellectual Development of Children and Young Adults in Tehran. From 1970 to 1978 he made many of his award-winning animated films, posters for films and illustrations for children books under its auspices. In 1979 he moved to Paris. In the next four years he worked as an artist producing a number of paintings as well as sculptures, which were presented at Sammy King Gallery in Pairs.

In 1986 he moved to Southern California. He opened his graphic design studio, Desktop Studio in Los Angeles. From 1990 to 1994 he created a series of digital artworks based on snapshot photos. They were exhibited in some galleries and later in L.A. County Museum of Modern Arts. At present he is working on a few sculptures and installation projects in his studio in Tehran.

The biennial Hans Christian Andersen Award conferred by the International Board on Books for Young People is the highest recognition available to a writer or illustrator of children's books. Mesghali received the illustration award in 1974.

He has been recognized many times for particular works:

All content from Kiddle encyclopedia articles (including the article images and facts) can be freely used under Attribution-ShareAlike license, unless stated otherwise. Cite this article:
Farshid Mesghali Facts for Kids. Kiddle Encyclopedia.