The Mall at Prince Georges facts for kids

The Mall at Prince Georges is an enclosed regional shopping mall located in Hyattsville, Maryland, at the intersection of Belcrest Road and East-West Highway (Maryland Route 410). It is served by a Washington Metro station, Prince George's Plaza, which shares the mall's former name. This station is on the Green Line. Located across Belcrest Road from the Mall is the University Town Center mixed-use development. It is currently owned and managed by PREIT.

The Mall at Prince Georges is anchored by Five Below, TJ Maxx, Ross Dress For Less, Marshalls, Macy's, JCPenney, and Target.

The mall opened as an open-air shopping center in 1959, known as the Prince George's Plaza (PGP). It was expanded several times and was enclosed in the late-1970s. It was known as Prince Georges Plaza until November 14, 2004, when it was renamed to its current name of The Mall at Prince Georges following an extensive renovation. 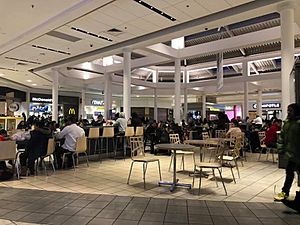 The Food Court at The Mall at Prince Georges

The opening of the Plaza's Hecht Company store on November 2, 1958, signaled the opening of Prince George's Plaza. It was the fourth D.C.-area store in the rapidly growing chain. An estimated 3,000 persons attended the opening for ceremonial speeches and the ribbon-cutting. The principal speaker was Maryland Gov. Theodore R. McKeldin. The governor purchased a six-foot aluminum ladder from the Hecht Company, which he said he would use in his recently purchased home in Baltimore. At the opening, Hecht's occupied nearly one-third of the 600,000 square feet (56,000 m2) of business space, and developers anticipated 60 other stores. There was parking for some 4,000 cars.

In September 2006, the store was converted into a Macy's, following the disbandment of Hecht's. 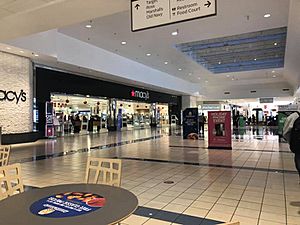 The Macys at The Mall Of Prince Georges in 2019

The following month another anchor, Grand Union supermarket, opened its doors. On December 17, 1958, Santa Claus cut the red ribbon at 9 a.m. at the grand opening of the Grand Union store. He arrived by helicopter to ceremonially open the new 45,000-square-foot (4,200 m2) store.

The store also featured a "food-o-matic display" that housed the canned and packaged goods. It also included a gourmet foods department featuring one of the largest varieties of the world's finest cheeses to be found anywhere in the metropolitan area. The store also featured a rotisserie for barbecued chicken, a service bakery, and fully automated check-out booths.

Food-a-rama, a local Baltimore chain, bought the Prince George's Plaza Grand Union store along with other Grand Union and Basics stores in Maryland and D.C. in 1984. The Hyattsville store was converted to a high-volume store. After the supermarket closed, Kids "R" Us occupied the space for several years, followed by Office Depot, which closed in March 2009 and which was replaced by Kids 4 Less, which in turn closed in 2013 to make way for TJ Maxx.

View of the mall from the parking lot

In December 1965, Raleigh Haberdasher announced plans to lease 20,000 square feet (1,900 m2) in the Prince George's Plaza shopping center for its fifth store in the Washington area. The store opened in the spring of 1966. After Raleigh's closed the location in 1991, it was broken up into a variety of retail spaces. The entire Raleigh Haberdasher chain closed by the end of 1992. The former Raleigh's space was eventually demolished and rebuilt as Target (which opened late 2004), with Marshalls and Ross Dress for Less opening on the lower level of the new space shortly thereafter.

Another local department store, Woodward & Lothrop, opened at Prince George's Plaza in August 1966. While building the Woodies store, two boys were killed when digging in a cave on a fragile hillside nearby. After the demise of the Woodies chain in 1995, the space was occupied by JCPenney.

On June 23, 2020, JCPenney announced that it would close by around October 2020 as part of a plan to close 13 stores nationwide.

All content from Kiddle encyclopedia articles (including the article images and facts) can be freely used under Attribution-ShareAlike license, unless stated otherwise. Cite this article:
The Mall at Prince Georges Facts for Kids. Kiddle Encyclopedia.