The Messenger is a statue by the English sculptor David Wynne, OBE of a horse and rider. It was installed in the town centre of Sutton in Greater London, England in 1981. 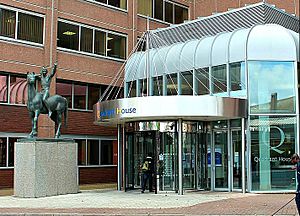 The statue in situ

The company had initially considered that the work should be installed high up, above the entrance lobby. However, Wynne advised against this, feeling that the distance created would militate against the engagement he wanted people to have with the work. It would be perceived as two-dimensional, depriving people of the full three-dimensions they would feel by walking around it. So the statue was installed at ground level in front of the entrance to the building, enabling people to get close up to it.

Describing his thoughts moments before the unveiling, David Wynne wrote in his 1982 book The Messenger:

It is a proud moment for the sculptor when he sees a crowd of expectant and rather puzzled people gazing at an ungainly shrouded shape in the most prominent position outside a gleaming new building. Will they be surprised, pleased, disappointed or even appalled when the cover comes off? Too late to change it now!

All content from Kiddle encyclopedia articles (including the article images and facts) can be freely used under Attribution-ShareAlike license, unless stated otherwise. Cite this article:
The Messenger (David Wynne sculpture) Facts for Kids. Kiddle Encyclopedia.