The New Lassie facts for kids

The New Lassie is an American children and family oriented drama series which aired in first-run syndication from September 8, 1989 to February 15, 1992. The series stars Will Estes (then using his real name of Will Nipper) as Will McCullough, Lassie's new master. Real life husband and wife Christopher and Dee Wallace-Stone co-starred as Will's parents.

The New Lassie is essentially a sequel to the 1954 series, and was the latest in the line of works featuring the Lassie character, which debuted in the 1943 film Lassie Come Home, followed by several more movies and the aforementioned television series, which ran from 1954 to 1973.

The series centers on the McCulloughs, a middle-class family living in suburban Glen Ridge, California. The McCulloughs are the owners of the then-present-day descendant of Lassie. Real life spouses Christopher and Dee Wallace-Stone played Chris and Dee McCullough, with Will Estes (credited by his given name of Will Nipper) and Wendy Cox appearing as their young son Will and teenage daughter Megan respectively. 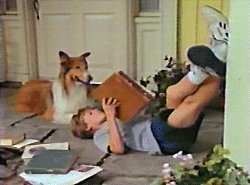 Will McCullough (Will Nipper) with Lassie

Jon Provost, who starred in the original Lassie series, portrayed Chris' brother Steve McCullough who was revealed in a later episode to be the adult Timmy Martin in an episode guest-starring June Lockhart in a reprisal of her role as Timmy's foster mother Ruth Martin. In the episode titled "Roots", Timmy reveals that he was never officially adopted by the Martins, and thus couldn't go with them to Australia when they moved there (at the beginning of season 11 of the original Lassie series). Subsequently, he was later adopted by the McCullough family, and began going by his middle name of Steven (Steve).

Guest stars with a Lassie past included Roddy McDowall, who had starred in the first movie Lassie Come Home (1943) and Tommy Rettig, who had played Jeff Miller in the early years of the original television series (later syndicated as Jeff's Collie). Other guest stars included Leonardo DiCaprio and Todd Bridges.

After its cancellation, reruns of The New Lassie aired on TV Land Canada in 2007.

All content from Kiddle encyclopedia articles (including the article images and facts) can be freely used under Attribution-ShareAlike license, unless stated otherwise. Cite this article:
The New Lassie Facts for Kids. Kiddle Encyclopedia.