The Old Woman in the Wood facts for kids

"The Old Woman in the Wood" (German: Die Alte im Wald) is a German fairy tale collected by the Brothers Grimm, tale number 123. It is Aarne-Thompson type 442. 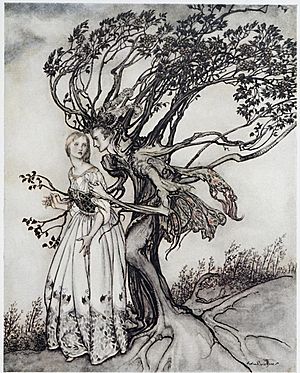 ""Suddenly the branches twined round her and turned into two arms." Illustration by Arthur Rackham, 1917

A beautiful but poor servant girl traveled with the family she worked for when robbers attacked them. She hid behind a tree, but no one else survived. She lamented her fate, and a dove came to her with a golden key. It told her to unlock a tree and she found food there. In the evening, it brought her one to a tree with a bed. She lived like this for many days. When the dove asked her to do something for it, she agreed. It told her to go to a house and go in. An old woman would greet her, but she should not answer. She should open an inner door, which will reveal a room full of splendid rings, but she should take a plain one.

The old woman was quite angry, but the girl did not heed her. Then, when she could not see the plain ring, she saw the old woman trying to carry off a bird cage. She took it away from her. It held a bird, which held the ring in its beak, so she took it outside and waited against a tree. Two branches turned into arms about her as the tree turned into a handsome man who kissed her. He told her that the old woman was a witch who had turned him into a tree, and for two hours a day, he became a dove, and she had freed him. All his attendants turned back from trees to humans as well. With the prince being a king's son, they went to his father's kingdom and got married.

All content from Kiddle encyclopedia articles (including the article images and facts) can be freely used under Attribution-ShareAlike license, unless stated otherwise. Cite this article:
The Old Woman in the Wood Facts for Kids. Kiddle Encyclopedia.