The Palms Shopping Centre is a shopping mall located in the suburb of Shirley, Christchurch. Situated 4 kilometres (2.5 mi) from the city's CBD. 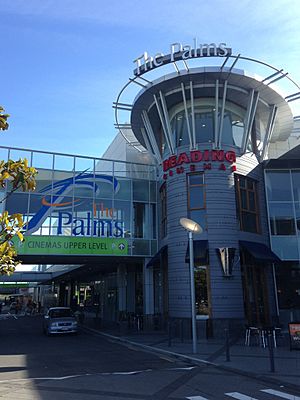 The Palms Shopping Centre in Shirley, arena area featuring Reading Cinemas and a range of restaurants and bars

The mall consists of 95 retailers, including Countdown, Farmers and the first Reading Cinemas multiplex in Christchurch. In 2003, a $50 million NZD upgrade was completed, nearly doubling the size to 35,343 m² (380,429 ft²) . The entry plaza of the mall won an NZILA Silver award for landscape design in 2004.

Since the 1990s, AMP Capital has bought 57 residential properties in the area surrounding the mall that is zoned residential. During 2015, the mall owners applied to have some of the land they owned rezoned commercial so that the mall could expand. In December 2015, the commercial rezoning was approved. At the same time, Christchurch City Council also rezoned some residential land to allow higher density around the mall. It was also confirmed that the owners have talked to Christchurch City Council about purchasing a block of council-owned social housing located between the mall and the residential properties they purchased north of the mall.

All content from Kiddle encyclopedia articles (including the article images and facts) can be freely used under Attribution-ShareAlike license, unless stated otherwise. Cite this article:
The Palms Shopping Centre Facts for Kids. Kiddle Encyclopedia.