Shirley, sometimes referred to as Windsor, is a suburb of Christchurch, New Zealand, about 5 kilometres (3.1 mi) north-east of the city centre. The area was used for farming from the 1850s, and subdivision started in the early 20th century, with most of the houses being built between 1950 and 1980.

The suburb spreads across wholly flat land which before the arrival of the first European colonists in the 1850s consisted of streams running into marshland between weathered and grassy sand dunes. Sheep and dairy cattle began to be grazed on the land within a few years of the colonists' arrival, the area being part of the Sandhills station. Land began to be bought by families of small farmers from 1863 onwards, and during the rest of the 19th century the future suburb was a district of market gardens, dairy farms and small grazing farms divided by hedgerows. A farmhouse and stables could be found along the roads every few hundred metres. As more and more land was drained it was often highly productive. One large estate was established by the very wealthy Rhodes family who chose not to live on the land but instead resided in a very large mansion in Merivale. Their estate in the district was run by managers and overseers. The district's settlers were mostly English and Scottish, but some Irish families also settled, as well as – in the 1870s – a significant group of Poles from eastern Germany. A small village of shops and one or two churches had begun to grow up by that time along what would later become known as Shirley Road.

Most of the housing in Shirley was built between 1950 and 1980. A large block of state housing, known as the Emmett Block, developed on the western side of the suburb during the immediate postwar years. On the eastern side the housing was built mostly by private developers, among others Paramount Homes. The standard house built by developers was a one-storey bungalow of three or four bedrooms under a low roof in streets that sometimes followed the course of old streams, meandered in various artificial crescents, or else ended in cul-de-sacs. The socio-economic level of the suburb as a whole has always been very near the average for the suburbs of Christchurch. The poorest streets are in the Emmett Block. The most expensive streets tend to be towards the north of the suburb or in a cluster near Dudley Stream.

The suburb was given its name by a property developing family. Susannah Buxton (née Shirley) was married to John Buxton (1806–1886). On her deathbed in 1868, she asked her son, Joseph Shirley Buxton (1833–1898), to gift land to the Methodists to build a church. Her wish was carried out and the Shirley Methodist Church was named after her. The suburb eventually became known as Shirley after the church.

Subdivision started in the early 20th century, at which time the area was known as North Richmond. The name then changed to Windsor, until it was discussed at a meeting at the Windsor Wesleyan School that land agents indicated land sold better if the locality was called Shirley instead of Windsor. Windsor thus went out of fashion as the name of the suburb, but it lives on in names like Windsor Golf Club, Windsor Service Station, Windsor House, and Windsor School. 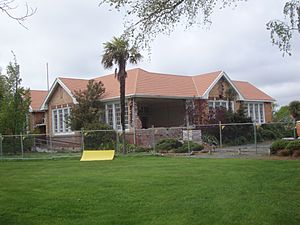 The suburb now includes one of the largest shopping malls in Christchurch, called The Palms Shopping Centre, together with the Shirley Golf Course and Bunnings Homebase. Shirley Boys' High School opened in September 1957. The former primary school was converted to a community centre. The building is listed as a Category II heritage structure with Heritage New Zealand and was badly damaged in the February 2011 Christchurch earthquake. It has since been demolished.

All content from Kiddle encyclopedia articles (including the article images and facts) can be freely used under Attribution-ShareAlike license, unless stated otherwise. Cite this article:
Shirley, New Zealand Facts for Kids. Kiddle Encyclopedia.