The Pen Centre facts for kids 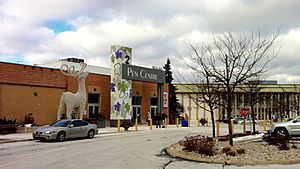 Exterior shot of the Pen Centre viewed from the south-east.

The Pen Centre was built in 1957 as the Niagara Peninsula Centre, a single level, outside strip mall, anchored by Loblaws and 50 retail stores and opened in 1958. In 1966, the evolution of the Pen Centre included the addition of Simpson-Sears and 80 new stores, making the Pen Centre the fourth largest shopping centre in Canada. The mall remained as an open-strip, with landscaped walkways in between. By September 1975 the strip-mall was enclosed and became a climate-controlled environment at a cost of $2 million. Located next to the Highway 406, it has over one million square feet of floor space and features over 180 stores, a major department store, a supermarket, a ten-screen movieplex, and several large format anchors.

Famous Players opened the first SilverCity 8-screen multiplex cinema at that location on November 7, 1997. It is now owned by Landmark Cinemas.

In 2011, the mall began a $13 million renovation of the common space, including 3,600 sq. ft. of new skylights, a new food court, floors and ceiling treatments. The renovations were completed in 2012.

Target announced that it was opening a store in the Pen Centre’s former Zellers location in 2013. Just over a year later, in April 2015, Target shuttered all of its Canadian stores. Later in 2015, the location was sold to Walmart Canada, which began construction on a newly revamped building in February 2018, and opened on August 22nd, 2019. Sears closed its store along with all other Canadian stores in January 2018, The former space occupied by Sears was renovated into two large format stores SportsCheck which relocated from elsewhere in the mall (opening summer 2020) and Marks (opening early 2021) as well as numerous smaller retail spaces. In addition Trillium College opened in the basement of this space in September 2021. As a result of the COVID environment the remainder of these retail units remain vacant

All content from Kiddle encyclopedia articles (including the article images and facts) can be freely used under Attribution-ShareAlike license, unless stated otherwise. Cite this article:
The Pen Centre Facts for Kids. Kiddle Encyclopedia.