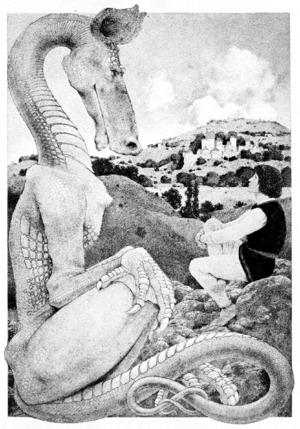 "The Reluctant Dragon" is an 1898 children's story by Kenneth Grahame, originally published as a chapter in his book Dream Days. It is Grahame's most famous short story, arguably better known than Dream Days itself or the related The Golden Age. It can be seen as a prototype to most modern stories in which the dragon is a sympathetic character rather than a threat.

The story takes place in the Berkshire Downs in Oxfordshire (where the author lived and where, according to legend, St. George did fight a dragon).

All content from Kiddle encyclopedia articles (including the article images and facts) can be freely used under Attribution-ShareAlike license, unless stated otherwise. Cite this article:
The Reluctant Dragon (short story) Facts for Kids. Kiddle Encyclopedia.