The Thing About Jellyfish facts for kids

The Thing About Jellyfish is a 2015 children's novel written by Ali Benjamin, her fiction debut. 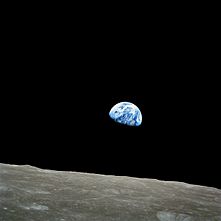 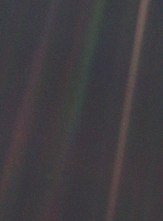 Pale Blue Dot (February 14, 1990)
Two images of Earth presented by Mrs. Turton, the 7th grade science teacher. Suzy narrates: "I liked the view from 1968 so much better. In the 1968 view, we mattered. I wished we hadn't gone any farther out, that we hadn't tried to see ourselves from the outer edge of the solar system. i wished we hadn't seen ourselves as a speck of dust, surrounded by so much nothing we were barely even visible."

The book follows Suzy Swanson, the protagonist and narrator, who theorizes the death of her friend, Franny Jackson, was caused by a jellyfish sting. Suzy has started the seventh grade, which is the second year at Eugene Field Middle School in South Grove, Massachusetts. During their sixth grade year, Franny became interested in boys and started to join a more popular social circle than the sometimes awkward Suzy, who had been best friends with Franny starting shortly after they met, when they were both five years old. After the two had a falling out in the sixth grade year, Franny died during the ensuing summer before they had a chance to heal their friendship. Suzy discovers a ton more about jellyfish than she expected she would, and confides in her science teacher, who helps her form her theory. Suzy also reads about brave and daring scientists who study jellyfish, and tries to get in contact with them, to work as a team to try and prove her theory about Franny's death.

Reese Witherspoon announced in October 2015 on her Instagram feed that her company, Pacific Standard Films, would create a film based on the novel. In January 2017, OddLot Entertainment acquired the screen rights to the novel. Gigi Pritzker, Bruna Papandrea, and Witherspoon were named as the producers. In March 2019, it was announced that Wanuri Kahiu would be directing the film, with Millie Bobby Brown starring as Suzy.

All content from Kiddle encyclopedia articles (including the article images and facts) can be freely used under Attribution-ShareAlike license, unless stated otherwise. Cite this article:
The Thing About Jellyfish Facts for Kids. Kiddle Encyclopedia.