The Three Languages facts for kids

"The Three Languages" is a German fairy tale collected by the Brothers Grimm, tale number 33. It is Aarne-Thompson type 671.

The tale was collected by the Brothers Grimm from a man named Hans Truffer from Visp. The tale was included in the 1819 edition of their Kinder- und Hausmärchen, replacing the earlier Der gestiefelte Kater ("The Tomcat with Boots").

A count's only son could learn nothing. Three times the count sent him for a year to famous masters. Each time, the son came back: saying first that he knew what dogs said when they barked; the next time, what birds said; and finally, what frogs said. Infuriated by his uselessness, his father ordered his people to take him to the woods and kill him, but they sympathised with him, and instead brought the count the eyes and tongue of a deer as proof of his death. 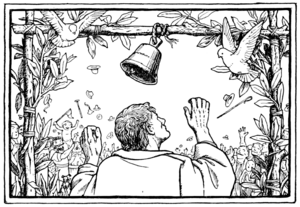 The doves approach the bell - a portent signaling the election of the new Pope. Illustration by John Batten for Joseph Jacobs's Europa's Fairy Book (1916).

On his wanderings, he liberated an area from haunting by dogs, by raising a treasure from under a tower, which he could do because he understood their language. The lord of the castle asked him to do so, and he came out with a chest of gold, and the lord adopted him as a son.

He went to Rome. In Rome, the Pope had died, and the cardinals wanted him as the Pope's successor, as two doves had sat on his shoulders as a divine sign. On his journey, listening to the frogs had made him sad and thoughtful. He consented to his appointment, as the doves advised him to do. When he had to read Mass, the doves whispered how to do it in his ear.

All content from Kiddle encyclopedia articles (including the article images and facts) can be freely used under Attribution-ShareAlike license, unless stated otherwise. Cite this article:
The Three Languages Facts for Kids. Kiddle Encyclopedia.