The White Doe facts for kids

The White Doe or The Doe in the Woods is a French literary fairy tale written by Madame d'Aulnoy. Andrew Lang included it in The Orange Fairy Book.

James Planché, author and dramatist, translated the tale as The Hind in the Woods.

Further English translations renamed it The Story of the Hind in the Forest, The Enchanted Hind, The Hind of the Forest. and The White Fawn.

French illustrator Edmund Dulac included another version in his book Fairy Tales of the Allied Nations, with the title The Hind of the Wood.

A crab (or lobster, in some translations) brought a childless queen to a fairy palace, where she was revealed as the fairy of the spring, and took the form of a little old lady. The fairies promised her that she would soon have a daughter, and told her to name her Desirée and summon them to the christening. When the princess was born, she did invite them, but not the crab, who arrived, indignant. The other fairies placated her, but the crab, not laying her full intended curse, nevertheless said that Desirée would be the worse for it, if any sunlight touched her in her first fifteen years.

At the advice of the other fairies, the king and queen built a subterranean castle for the princess to live in. When her fifteenth birthday approached, the queen had her portrait made and sent it to all the neighboring princes. One fell so in love with her that he often shut himself up with the portrait and talked to it. When the king, his father, learned this, the prince persuaded him to break a betrothal with the Black Princess and send an ambassador to Desirée. The fairy Tulip, who loved Desiree best, warned not to let the ambassador see her before the birthday. At his suit, however, they agreed to bring the portrait to the princess, who was much taken by it, and to hold the wedding in three months, after her birthday.

The prince was so love-sick that the king sent messages to implore them to put forward the wedding.

Meanwhile, the Black Princess was deeply offended. Though she declared that he had his freedom, because she could not love a dishonorable man, she implored the aid of her fairy godmother, the fairy of the spring, who was reminded of the injury and resolved to harm Desirée. 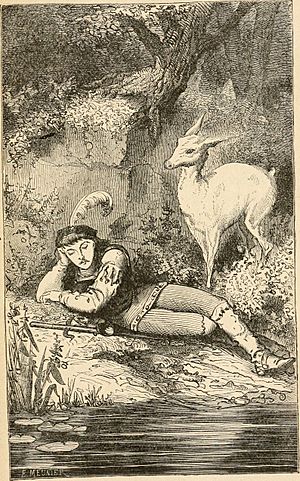 The enchanted doe approaches the prince, asleep by the stream. Illustration from a 1908 publication.

Hearing that the prince was dying for love of her, Desirée proposed that she travel by closed carriage, and open it for food only at night. When this was put into effect, the mother of a jealous lady-in-waiting, persuaded by her daughter, cut open the coach and let light on the princess. She instantly turned to a white doe and bounded off. The fairy of the spring created a thunderstorm that frightened off the servants, a faithful lady-in-waiting chased the doe, and the jealous one disguised herself as the princess and went on. She pleaded the thunderstorm for her condition, but her ugliness astounded the prince. He left the palace rather than endure such a marriage, and went to the forest with only the ambassador.

The fairy Tulip led the faithful lady-in-waiting to the doe and after witnessing their reunion, appeared. She could only turn the princess back to a woman by night and direct them to a hut where they might stay. An old woman took them in there; somewhat later, the ambassador found it, and the old woman gave him and the prince shelter. The next day, the prince saw the doe and shot at it, but the fairy Tulip protected her. The day after, the doe avoided where he had shot, and the prince hunted long for her, until he, exhausted, slept. The doe came upon him and, seeing she had the advantage of him, studied him. She woke him, and he chased her until she was exhausted and let him catch her. He treated her as a fond pet, but she escaped before nightfall, for fear that her change would shock him. The next day, the prince wounded her and was much distressed, but took her back by force to the hut. The lady-in-waiting objected and the prince had to give the doe up. The ambassador told him that he had seen the lady-in-waiting at Desiree's court, and they made a hole in the parition between the rooms, and saw the princess and heard her laments. They were joyously united. At dawn, she did not become a doe again.

The tale was one of many from d'Aulnoy's pen to be adapted to the stage by James Planché, as part of his Fairy Extravaganza. The tale was retitled as The Prince of Happy Land, or, The Fawn in the Forest when he translated it to the stage.

All content from Kiddle encyclopedia articles (including the article images and facts) can be freely used under Attribution-ShareAlike license, unless stated otherwise. Cite this article:
The White Doe Facts for Kids. Kiddle Encyclopedia.