The Wild One (roller coaster) facts for kids

The Wild One is a wooden roller coaster at Six Flags America in Prince George's County, Maryland. It features a 450° spiral helix and a series of bunny hills that produce a significant amount of air time. The wooden coaster was previously known as Giant Coaster when it was located at Paragon Park in Hull, Massachusetts. It operated there from 1917 to 1984. 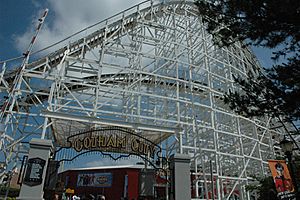 When the roller coaster first opened in 1917, it was a double out and back side friction coaster called "The Giant Coaster" at Paragon Park in Nantasket Beach, Massachusetts, approximately 25 miles (40 km) south of Boston. Herbert Paul Schmeck redesigned much of the ride in 1932 after it was partially destroyed by fire. In April 1963, another fire destroyed the station, trains, double helix finale and part of the lift hill. The park wanted John C. Allen to rebuild the coaster as it was, but his estimate proved too high for the traditional park. Instead he left out two bunny hops and the helix finale in order to create an angled approach into the brake run. Although nowhere near as exciting as Miller's finish, Allen gave the park an affordable alternative to tearing down the coaster.

On July 19, 1963, Forest Park Highlands in St. Louis suffered from a massive fire, but its roller coaster, Comet, remained standing. When Comet was torn down in 1968, Paragon Park bought its trains as opposed to buying more expensive ones from Philadelphia Toboggan Company. The trains continued to have the name "Comet" labeled on the front car during the remaining years of Giant Coaster's operation.

The Giant Coaster closed with Paragon Park in 1984 and was sold to Wild World (now Six Flags America), which acquired the ride in a last minute bid at auction. In 1986, renamed The Wild One, the Giant Coaster opened in its current location, restored to its original condition, reincorporating the original helix at the end of the ride. Some of this retracking was completed by Martin & Vleminckx. American Coaster Enthusiasts awarded The Wild One the organization's Coaster Landmark award on June 18, 2018.

All content from Kiddle encyclopedia articles (including the article images and facts) can be freely used under Attribution-ShareAlike license, unless stated otherwise. Cite this article:
The Wild One (roller coaster) Facts for Kids. Kiddle Encyclopedia.