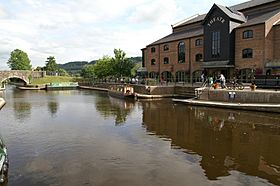 Theatr Brycheiniog on the basin of the Monmouthshire and Brecon Canal

Theatr Brycheiniog is located on Canal Wharf, alongside the Monmouthshire and Brecon Canal, close to Brecon town centre.

Theatr Brycheiniog, opened in 1997, was designed by Powys County Council Architects (Roger Bullock) with Carr and Angier as theatre consultants. It was built as part of the regeneration of the canal area and received funding from the European Regional Development Fund and the Arts Council of Wales’ Lottery scheme. It is constructed of red brick and the roof covered with Welsh slate in the style of a canal warehouse, with has two timber-clad projections with stone parapets, housing gantry towers.

The theatre is equipped with a grid of 58 counterweight lines, an orchestra pit and sixteen traps. Three lighting bridges span the auditorium, which is square with seating on three levels with side slips. The floor is flat with seating waggons, mounted on air castors to allow a variety of arrangements. There is also a rehearsal studio, which doubles as a conference room, capable of seating 150.

It became the first solar-powered theatre in Wales, in 2007, generating part of its energy from photo-voltaic cells on the roof.

The venue attracts acts ranging from stand up comedians to folk singers and full orchestras, both national and international. It has also been a venue for parts of the Brecon Jazz Festival weekend.

The theatre's patrons are Rachel Podger and Michael Bogdanov.

All content from Kiddle encyclopedia articles (including the article images and facts) can be freely used under Attribution-ShareAlike license, unless stated otherwise. Cite this article:
Theatr Brycheiniog Facts for Kids. Kiddle Encyclopedia.