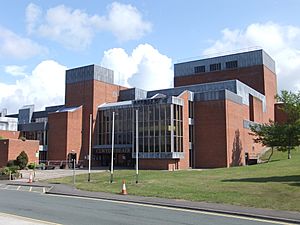 Theatr Clwyd is a regional arts centre and producing theatre 1 mile (1.6 km) from Mold, Flintshire, in North East Wales. It opened as Theatr Clwyd in 1976, but was known between 1998 and 2015 as Clwyd Theatr Cymru, before reverting to its original name.

HTV Wales had offices and a studio at the site from the late 1970s to the mid 1980s, but production was scaled back following the opening of the company's new studio complex at Culverhouse Cross in Cardiff. A small news operation remained in Mold until the late 1990s but closed when HTV moved its North Wales news operations to Colwyn Bay and Wrexham.

The name of the complex was changed to Clwyd Theatr Cymru in 1998 to reflect the reorganisation of local government at that time which abolished Clwyd as a county and brought Flintshire back into existence, although defined by different borders from the original ones. However, in 2015 the complex reverted to its original name.

Apart from hosting visiting theatre companies, Theatr Clwyd is home to Wales' major drama producing theatre company, under the artistic direction of Tamara Harvey, which stages their own productions throughout the year (including one of the longest-running pantomimes in the country) and also regularly performs on tour around Wales and the UK.

Theatr Clwyd hosted the successful second stage performance of The Hitchhiker's Guide to the Galaxy.

All content from Kiddle encyclopedia articles (including the article images and facts) can be freely used under Attribution-ShareAlike license, unless stated otherwise. Cite this article:
Theatr Clwyd Facts for Kids. Kiddle Encyclopedia.