Thelymitra maculata, commonly called the spotted curly locks or eastern curly locks, is a species of orchid in the family Orchidaceae and endemic to the south-west of Western Australia. It has a single erect leaf, spiralling around the flowering stem and a single pink or purplish, spotted flower with more or less circular, yellow ear-like arms on the sides of the column. 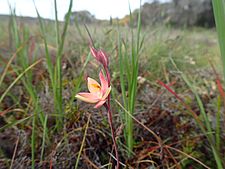 Spotted curly locks was first formally described in 1949 by William Henry Nicholls who gave it the name Thelymitra spiralis var. pulchella and published the description in The Victorian Naturalist. In 2009 Jeff Jeanes raised the variety to species status, gave it the name Thelymitra maculata and published the updated description in Muelleria. The specific epithet (maculata) is from the Latin macula, ('spot') and refers to the spots on the sepals and sometimes also the petals.

Thelymitra maculata grows in dry inland heath or woodland, often near rock outcrops and is found between Watheroo, Ongerup and Hyden.

Thelymitra maculata is classified as "not threatened" by the Western Australian Government Department of Parks and Wildlife.

All content from Kiddle encyclopedia articles (including the article images and facts) can be freely used under Attribution-ShareAlike license, unless stated otherwise. Cite this article:
Thelymitra maculata Facts for Kids. Kiddle Encyclopedia.