The Third Avenue Bridge is a landmark structure of the city of Minneapolis, Minnesota, United States, originally known as the St. Anthony Falls Bridge. It carries road traffic across the Mississippi River and upper fringes of Saint Anthony Falls. The multi-arched bridge meets with Third Avenue in downtown Minneapolis at its south end, but curves as it crosses the river, and connects with Central Avenue on its north end. The shallow "S" curve in the bridge was built to avoid fractures in the limestone bedrock that supports the bridge piers. The road is also designated Minnesota State Highway 65. Construction began in 1914, and it opened four years later in 1918. The bridge, which uses Melan arches of an open spandrel design, has been modified since that time. The 2,223-foot (667.6 m) crossing was designed by city engineer Frederick W. Cappelen, who also created plans for other similar bridges in Minneapolis such as the Franklin Avenue Bridge. It cost US$862,254.00 at the time of construction.

The bridge underwent a major overhaul in 1979–1980. Another restoration is planned to extend its life 50 years with a new deck, and other improvements to barriers, railings, and lighting. As the bridge is a contributing member of the St. Anthony Falls Historic District, a goal of the project is preserving its historic design elements. The three-year construction project is to begin in fall 2019 under the direction of general contractor Ames Construction, Inc.. 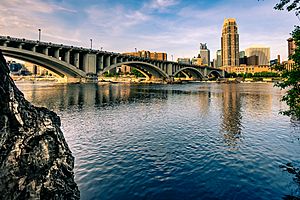 All content from Kiddle encyclopedia articles (including the article images and facts) can be freely used under Attribution-ShareAlike license, unless stated otherwise. Cite this article:
Third Avenue Bridge (Minneapolis) Facts for Kids. Kiddle Encyclopedia.