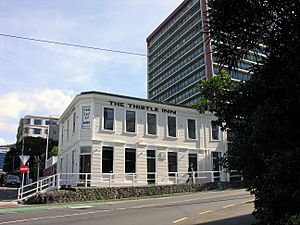 The Thistle Inn is one of New Zealand's oldest public houses. It was originally built in 1840 by William Couper, and the name 'Thistle Inn' probably comes from his Scottish background. William Couper held the lease on the building for many years.

The original building was destroyed by a fire in 1866, but it was rebuilt within months. Up until the reclamation of Wellington Harbour the building was only a few metres from the shoreline and patrons often arrived by boat, including, according to legend, the Ngati Toa warrior chief Te Rauparaha. In 2008 the Hospitality Association declared that the Thistle Inn was New Zealand's oldest pub.

The Thistle Inn was featured in Leves Amores, a short story by Katherine Mansfield, written in 1907.

The building, is classified as a "Category I" ("places of 'special or outstanding historical or cultural heritage significance or value") historic place by the New Zealand Historic Places Trust.

All content from Kiddle encyclopedia articles (including the article images and facts) can be freely used under Attribution-ShareAlike license, unless stated otherwise. Cite this article:
Thistle Inn Facts for Kids. Kiddle Encyclopedia.