Thomas John Ryan, Jr. (August 5, 1901 – January 28, 1970) was a career American naval officer who rose to the rank of Rear Admiral. He received the Medal of Honor during peacetime. 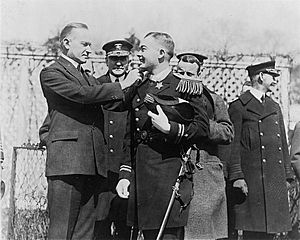 Ryan's Medal of Honor recognized his conduct in Japan during the 1923 Great Kantō earthquake.

The words of Williams' citation explain:

For heroism in effecting the rescue of a woman from the burning Grand Hotel, Yokohama, Japan, on 1 September 1923. Following the earthquake and fire which occurred in Yokohama on 1 September, Ens. Ryan, with complete disregard for his own life, extricated a woman from the Grand Hotel, thus saving her life. His heroic conduct upon this occasion reflects the greatest credit on himself and on the U.S. Navy, of which he is a part.

All content from Kiddle encyclopedia articles (including the article images and facts) can be freely used under Attribution-ShareAlike license, unless stated otherwise. Cite this article:
Thomas Ryan Facts for Kids. Kiddle Encyclopedia.