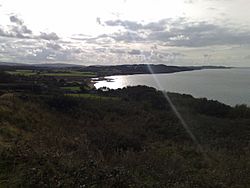 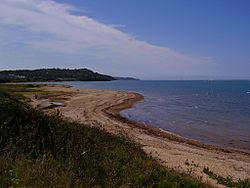 The beach at Thorness Bay

Thorness Bay is an 86.2 hectare Site of special scientific interest which is located on the north-west coast of the Isle of Wight, England, in the western arm of the Solent. The site was notified in 1966 for both its biological and geological features. The bay stretches about 3 km from Salt Mead Ledge in the west to Gurnard Head to the east.

The sea bed is a mixture of mud and sand.

A small unnamed brook enters the sea in the middle of the bay after passing through a marsh.

Little Thorness Farm, a beef farm near the bay has 18 acres (73,000 m2) of protected marshland under stewardship and is a SSSI because it is home to wildlife not found in other areas.

Thorness Bay also has a holiday park run by Parkdean Resorts. It has a direct footpath leading straight to the beach.

All content from Kiddle encyclopedia articles (including the article images and facts) can be freely used under Attribution-ShareAlike license, unless stated otherwise. Cite this article:
Thorness Bay Facts for Kids. Kiddle Encyclopedia.