"Three Little Kittens" is an English language nursery rhyme, probably with roots in the British folk tradition. The rhyme as published today however is a sophisticated piece usually attributed to American poet Eliza Lee Cabot Follen (1787–1860). With the passage of time, the poem has been absorbed into the Mother Goose collection. The rhyme tells of three kittens who first lose, then find and soil, their mittens. When all is finally set to rights, the kittens receive their mother's approval and some pie. It has a Roud Folk Song Index number of 16150.

The poem was published in England in 1827 in a mock review by William Ewart Gladstone, writing as Bartholomew Bouverie, in The Eton Miscellany.

A version was later published in 1833 as an anonymous addition to a volume of Follen's verse and in the United States in 1843. Follen may have developed and refined an existing, rude version of the poem, and, in the process, made it her own. The poem is a sophisticated production that avoids the typical moralization of 19th century children's literature in favour of anthropomorphic fantasy, satirical nonsense, and word play. 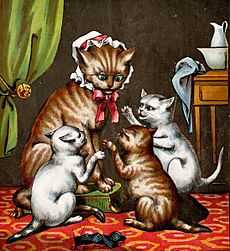 Illustration of the rhyme from 1874 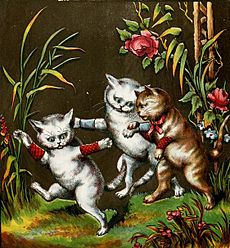 The kittens playing in the garden, an illustration from 1874

"O mother dear, we sadly fear
We cannot go to-day,
For we have lost our mittens."
"If it be so, ye shall not go,
For ye are naughty kittens."

From Gladstone, The Eton Miscellany (1827)

From Follen, New Nursery Songs for All Good Children (1843)

According to Janet Sinclair Gray, author of Race and Time, "Three Little Kittens" may have origins in the British folk tradition, but the poem as known today is a sophisticated production far removed from such origins. Gray supports her assertion by pointing out that the cats are not the barnyard felines of folk material but bourgeois domestic cats who eat pie and wear mittens. Gray observes that the mother cat's disciplinary measures and the kittens' need to report their movements to her are also indicators of a bourgeois status. "Three Little Kittens" is attributed to Bostonian Sunday school teacher and abolitionist, Eliza Lee Cabot Follen (1787–1860), a member of a prominent New England family and the author of the juvenile novel The Well-Spent Hour. Gray explains that "Kittens" is unlike any of Follen's typical poems, but also notes that Follen is just the sort of person who would write such a piece. It is unlikely Follen composed "Kittens" wholecloth, Gray believes, but rather far more likely that she developed and refined an existing but rude version of the piece. In doing so, she made the poem her own. Although Follen disclaimed authorship following the poem's first appearance in print, she continued to publish it under her name in succeeding years.

The poem was printed in 1827 in The Eton Miscellany. A later version was printed in 1833 in Britain in Follen's Little Songs for Little Boys and Girls. It was an addition to the volume and probably inserted by the publisher. In the introduction to a subsequent edition, Follen denied any hand in the poem's composition, but took it under her wing and claimed ownership as the poem passed through various reprints. The poem was first published in the United States in 1843 in Follen's New Nursery Songs for All Good Children. An 1856 American reprint was subtitled "A Cat's Tale, with Additions".

All content from Kiddle encyclopedia articles (including the article images and facts) can be freely used under Attribution-ShareAlike license, unless stated otherwise. Cite this article:
Three Little Kittens Facts for Kids. Kiddle Encyclopedia.