Thunder Run is a wooden roller coaster at the Kentucky Kingdom amusement park in Louisville, Kentucky. The ride originally operated from August 1990 through to October 2009, when then-operators Six Flags abandoned the park. After remaining closed since 2009, Thunder Run reopened in May 2014 when Kentucky Kingdom reopened under new operators.

Kentucky Kingdom opened on May 23, 1987, leasing 10 acres (4.0 ha) at the Kentucky Exposition Center property. The Texas investors who operated the park filed it for bankruptcy after only one season of operation. The Ed Hart-led Themeparks LLC firm purchased the rights to operate the park in 1989, reopening the park the following year. As part of the reopening the new operators added a collection of new rides including Thunder Run, which opened in August 1990. Early in Thunder Run's operating life, one of the cars uncoupled while climbing the lift hill and the ride's lap bars were found to be unsafe. No injuries were reported from these incidents. The original ride was retracked by Martin & Vleminckx prior to its closure in 2009.

Thunder Run operated until the end of the 2009 season which ended on November 1. On February 4, 2010, amid a corporate bankruptcy, Six Flags closed the park due to the rejection of an amended lease by the Kentucky State Fair Board. Eventually, on June 27, 2013, a group of investors led by Ed Hart negotiated an agreement to reopen the park with a planned investment of $50 million. Rocky Mountain Construction was hired to refurbish the coaster, resulting in replacement of the existing wooden track. On October 10, 2013, Kentucky Kingdom invited members of the media and amusement industry to ride the refurbished Thunder Run. The ride reopened to the public on May 24, 2014. After the 2016 season, Kentucky Kingdom announced that Thunder Run would receive a new train from the Philadelphia Toboggan Company for the 2017 season. This train replaced the single train that was first put into service in 1990.

The design was later used as the foundation for the International Coasters' roller coaster located at Carowinds and Kings Dominion named Hurler. 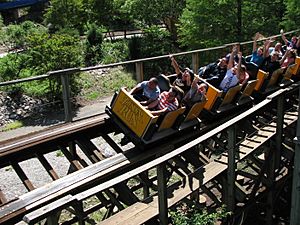 Thunder Run features a double out and back layout. It begins with a left turn out of the station. This leads to the 90-foot-tall (27 m) chain lift hill. Once at the top, riders go down a small dip and along a 180 degree turn to the left. The first drop of 74 feet (23 m) leads into a near-ground level 70-degree banked turn to the left. A series of small camelback hills are followed by a turnaround. The train proceeds back towards the station with another hill. This process repeats a second time leading back into the brake run and station.

All content from Kiddle encyclopedia articles (including the article images and facts) can be freely used under Attribution-ShareAlike license, unless stated otherwise. Cite this article:
Thunder Run (Kentucky Kingdom) Facts for Kids. Kiddle Encyclopedia.