Tieri War Memorial is a heritage-listed memorial at Talagai Avenue, Tieri, Central Highlands Region, Queensland, Australia. It was built in 1984. It was added to the Queensland Heritage Register on 29 June 2001.

The Tieri War Memorial was constructed in 1984 in memory of those servicemen and women from the Peak Downs area who served in a number of conflicts, but especially as a memorial to those who served in the Vietnam War.

The construction of the memorial came about when two Vietnam veterans met in Capella on ANZAC Day in 1983. At first, neither was aware that the other had served in Vietnam as they were not wearing their medals. This was due to the public feeling connected with the Vietnam War at the time. By the end of that day, however, the two had decided to hold the next ANZAC Day celebrations in Tieri.

It took several months to decide on an appropriate memorial which could be placed in the town. During the year, one of the Veterans located a large petrified tree and a piece of this was brought into the town and set up in the shopping centre. Following the ANZAC Day celebrations in 1984, it was decided that the shopping centre was not a suitable location for the memorial.

With assistance from Mount Isa Mines Limited, who provided the site and paid for the construction, the present Tieri War Memorial was completed. Since its construction, many returned servicemen and women have visited the memorial, particularly to commemorate ANZAC Day (25 April) and Long Tan Day (18 August). 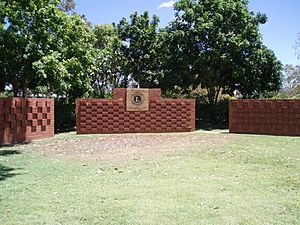 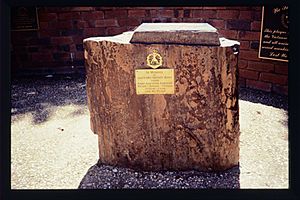 Tieri War Memorial was listed on the Queensland Heritage Register on 29 June 2001 having satisfied the following criteria.

War Memorials are important in demonstrating the pattern of Queensland's history as they are representative of a recurrent theme that involved most communities throughout the state.

The memorial at Tieri demonstrates the principal characteristics of a commemorative structure erected as an enduring record of a major historical event. This is achieved through the appropriate use of various elements, particularly commemorative plaques and trees, as well as the more unusual use of petrified wood.

The Tieri War Memorial is especially significant for its strong and continuing association with the community as evidence of the impact of major historic events and as the focal point for the remembrance of those events, particularly as a memorial to those who served in the Vietnam War.

All content from Kiddle encyclopedia articles (including the article images and facts) can be freely used under Attribution-ShareAlike license, unless stated otherwise. Cite this article:
Tieri War Memorial Facts for Kids. Kiddle Encyclopedia.