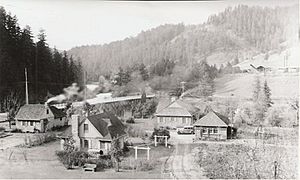 Tiller is an unincorporated community in Douglas County, Oregon, United States. It is located on Oregon Route 227 and the South Umpqua River, in the Umpqua National Forest.

Tiller was named for Aaron Tiller, who settled in the locality. Tiller post office was established in 1902.

In 2017, the entire community was offered for sale for $3.85 million. The town's sale to anonymous buyers was concluded in September 2018, for an undisclosed amount. The sale did not include the community church and pastor's residence or the fire station.

All content from Kiddle encyclopedia articles (including the article images and facts) can be freely used under Attribution-ShareAlike license, unless stated otherwise. Cite this article:
Tiller, Oregon Facts for Kids. Kiddle Encyclopedia.