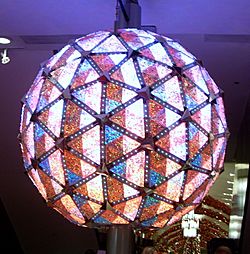 The Times Square Ball is a time ball (a ball dropped at a certain time) at the top of the One Times Square building in Times Square in New York City. It is used as part of the New Year's Eve celebration held yearly in Times Square. Every year at 11:59 p.m. EST, the ball is lowered 141 feet (43 m) from a flagpole, reaching the bottom at midnight to signal the start of a new year. The first ball drop took place on December 31, 1907. It has been dropped every year since then (except in 1942 and 1943 because of World War II). The ball's design has been changed many times over the years. The current design has LED lighting and triangle-shaped crystal panels. Starting in 2009, the ball is shown in One Times Square throughout the year.

The Times Square ball drop is one of the best-known New Year's Eve celebrations in the world. Over one million people come to Times Square every year to see the ball drop. The ball drop is shown on several major television networks. The best known is ABC, which broadcasts Dick Clark's New Year's Rockin' Eve with Ryan Seacrest. It was hosted by Dick Clark until his death in 2012. Ryan Seacrest has hosted the show since 2005-06, hosting with Clark until Clark's death.

All content from Kiddle encyclopedia articles (including the article images and facts) can be freely used under Attribution-ShareAlike license, unless stated otherwise. Cite this article:
Times Square Ball Facts for Kids. Kiddle Encyclopedia.