Tinikling is a traditional Philippine dance which originated during the Spanish colonial era. The dance involves two people beating, tapping, and sliding bamboo poles on the ground and against each other in coordination with one or more dancers who step over and in between the poles in a dance.The name "tinikling" is a reference to birds close known as tikling 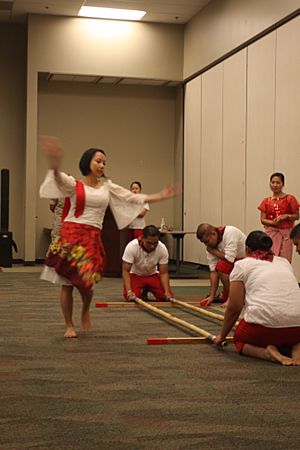 The dance is made/originated in Leyte, an island in the Visayas in the central Philippines. It follows the movement of the tikling birds as they walk between grass stems, run over tree branches, or dodge bamboo traps set by rice farmers. Dancers follow the tikling bird's legendary grace and speed by skillfully between large bamboo poles.[3]

Legend has it that tinikling originated during the Spanish rule of the Philippines, when natives worked on large plantations under the control of the King of Spain.

All content from Kiddle encyclopedia articles (including the article images and facts) can be freely used under Attribution-ShareAlike license, unless stated otherwise. Cite this article:
Tinikling Facts for Kids. Kiddle Encyclopedia.