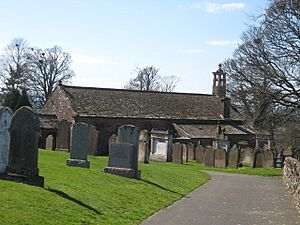 Tinwald Kirk built on the site of an earlier Church standing opposite a motte. 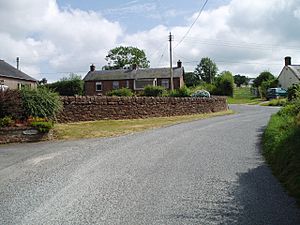 Motte on right of photo

Tinwald is a village in Dumfries and Galloway, south-west Scotland, lying a little north of Locharbriggs outside Dumfries. Tinwald is also the name of a civil parish in the county of Dumfriesshire. The village is near the former RAF Tinwald Downs which is the now the Dumfries Aviation Museum.

Tinwald was the birthplace of William Paterson (1658–1719), who helped to found the Bank of England.

The Church, built in 1769 on the foundations of an earlier church, is on the side of Tinwald Hill and visible from the A701 road. The Barony and Rectory of Tinwald, before and after the Reformation, belonged to the Maxwell family who appointed the vicars and later the ministers. In 1504 Willelmus Blak was vicar of Tynwald. On 13 July 1619 Robert Maxwell was served heir to his father, John Maxwell of "terris de Tynwald" in "baroniam de Tynwald".

In the 15th century the Tinwald Mote was still the caput or legal head of the barony, where sasine (possession) was given by the ceremony of handing the grantee, before witnesses, a handful of earth and stone from the head messuage called the Mote near the church of Tynwald.

See also Tynwald, parliament of the Isle of Man, and Tynwald Hill.

All content from Kiddle encyclopedia articles (including the article images and facts) can be freely used under Attribution-ShareAlike license, unless stated otherwise. Cite this article:
Tinwald, Dumfries and Galloway Facts for Kids. Kiddle Encyclopedia.