Tjukurla is a medium-sized Aboriginal community, located in the Goldfields-Esperance Region of Western Australia, within the Shire of Ngaanyatjarraku.

In the early 1980s a bore was put down near the present Tjukurla Community as part of the outstation movement from Docker River community. In mid 1981 an outstation was established at Kintore which provided an opportunity for those living at Papunya to move west, closer to their traditional lands. From Kintore many people moved to Tjukurla as that community's infrastructure developed. Residents also came from Warakurna, Docker River and a few from Warburton.

The community is located within the Determined Ngaanyatjarra Lands (Part A) (WAD6004/04) Native Title claim area. 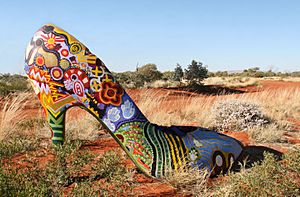 Tjukurla Layout Plan No.1 has been prepared in accordance with State Planning Policy 3.2 Aboriginal Settlements. Layout Plan No.1 is yet to be endorsed by the community. As such the Layout Plan exists only as a draft. The DRAFT Layout Plan map-set can be viewed at Planning Western Australia official site.

All content from Kiddle encyclopedia articles (including the article images and facts) can be freely used under Attribution-ShareAlike license, unless stated otherwise. Cite this article:
Tjukurla Community Facts for Kids. Kiddle Encyclopedia.