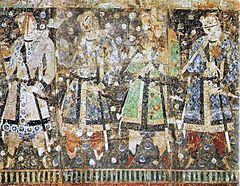 The Tocharians were an ancient people who lived in the Tarim Basin. They spoke an Indo-European language. The region they live in was closer to the Far East than that of any other Indo-European-speaking regions.

All content from Kiddle encyclopedia articles (including the article images and facts) can be freely used under Attribution-ShareAlike license, unless stated otherwise. Cite this article:
Tocharians Facts for Kids. Kiddle Encyclopedia.