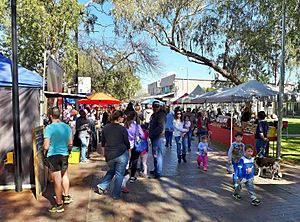 The Todd Mall is a mostly pedestrian mall in Alice Springs in the Northern Territory of Australia which serves as its "main street" and is one of the primary locations for shopping and leisure in the town. It contains many of the town's restaurants.

Fortnightly, from mid-March to early December, it also hosts the "Todd Mall Markets" as well as a number of "Night Markets" throughout the year. The Todd Mall is also the location of the Alice Springs Town Council's annual "Christmas Carnival" which features the lighting of the Council's Christmas Tree on the Council Lawns.

The Todd Mall is part of the first 104 lots of land released in the original township of Stuart which were released in 1888. From the very beginning the area now called Todd Mall, the northern section of what was then Todd Street, was considered the town's commercial centre; especially after the Stuart Arms Hotel was built (this is now the location of Alice Plaza).

Significant developments were made to the Todd Mall in the following years:

All content from Kiddle encyclopedia articles (including the article images and facts) can be freely used under Attribution-ShareAlike license, unless stated otherwise. Cite this article:
Todd Mall Facts for Kids. Kiddle Encyclopedia.