Todo Noticias, also known as TN is an Argentine TV news channel. It belongs to Grupo Clarín since 1993, when it was launched. Débora Pérez Volpin was the known reporter for the channel from 2005 until her retirement in 2017. 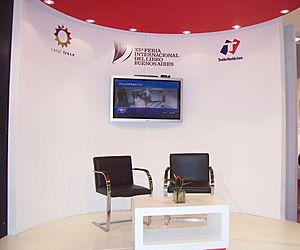 El Trece and Todo Noticias stand in Buenos Aires book fair, TN's logo is the one in the right

All content from Kiddle encyclopedia articles (including the article images and facts) can be freely used under Attribution-ShareAlike license, unless stated otherwise. Cite this article:
Todo Noticias Facts for Kids. Kiddle Encyclopedia.