Tomnaverie stone circle is a recumbent stone circle set on the top of a small hill in lowland northeast Scotland. Construction started from about 2500 BC, in the Bronze Age, to produce a monument of thirteen granite stones including a massive 6.5-ton recumbent stone lying on its side along the southwest of the circle's perimeter. Within the 17-metre (56 ft) circle are kerb stones encircling a low 15-metre (49 ft) ring cairn but the cairn itself no longer exists.

By 1930 Tomnaverie had fallen into a very dilapidated state, in good measure because it had been encroached on by a neighbouring quarry. Only four stones were still standing and many of the others were missing. In that year the monument was put into state guardianship but this merely stopped the destruction and made for no improvements. In 1999 an archaeological excavation commenced investigating how the circle had been constructed. Also, so far as possible, the monument would be returned closer to its original condition. This was very successful and the stone circle is now only missing two standing stones.

The excavation showed the cairn seems to have been constructed so as to prepare the way for the circle to be added in a pre-arranged alignment – this has since been demonstrated for other recumbent circles. It had previously been expected the cairn would have been built after the circle. This has made it doubtful that astronomical observations could have been made from within the circle or that the circle had been intended to have any precise orientation.

A recumbent stone circle is a type of stone circle constructed in the early Bronze Age. The identifying feature is that the largest stone (the recumbent) is always laid horizontally, with its long axis generally aligned with the perimeter of the ring between the south and southwest. A flanker stone stands each side of the recumbent and these are typically the tallest stones in the circle, with the smallest being situated on the northeastern aspect. The rest of the circle is usually composed of between six and ten orthostats graded by size. The builders tended to select a site which was on a level spur of a hill with excellent views to other landmarks. Over seventy of these circles are found in lowland Aberdeenshire in northeast Scotland – the most similar monuments are the axial stone circles of southwest Ireland. Recumbent stone circles generally enclosed a low ring cairn, though over the millennia these have often disappeared. They may have been a development from the Clava cairns found nearby in Inverness-shire and axial stone circles may have followed the design. Whilst cremated remains have been found at some sites, the precise function of these circles is not known. 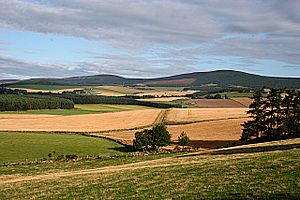 This recumbent stone circle is situated at the top of a small hill about 1 kilometre (0.6 mi) south of Tarland in Aberdeenshire. There is a visitors' car park from where it is a short uphill walk to the monument. The 178-metre (584 ft) hill is of granite, barely covered by thin soil. The area, called the Howe of Cromar, is surrounded by hills and mountains, most notably Lochnagar about 30 kilometres (19 mi) to the southwest, and Morven and Clachnaben. The circle is 17 metres (56 ft) across with the recumbent stone and its adjacent flankers looking southwest. The recumbent is a granite block 3.2 by 1 by 1.15 metres (10.5 ft × 3.3 ft × 3.8 ft) (length x thickness x height) and weighing 6.5 metric tons (7.2 short tons). The granite is intruded with quartz so as a whole this massive stone has a lighter colour than its attendant stones. It has two cup marks, one on its top and the other on its outer face. Depending on how it is measured, the orientation of the recumbent stone, looking out of the circle, is 236°–240° (southwest by west).

The circle is located on a constructed platform of stones up to 24 metres (79 ft) across and 0.6 metres (2 ft 0 in) high. On top of this there is a 15-metre (49 ft) polygonal cairn surrounded by a granite kerb of slabs and blocks. In the southwest, rather than continuing as a rough circle, the kerb turns outwards so as to meet the sides of the recumbent setting.

Condition before excavation in 1999

Apart from general deterioration over the millennia, the quarrying operations had led directly to serious damage. The face of the quarry wall was right next to the west of the circle, extending from northwest to southwest, so the workers in the quarry had possibly tipped the recumbent over onto its inside face and into the circle to avoid the risk of it falling into the quarry. Both flankers had been pulled vertically from their sockets and had fallen over outwards from the circle. The western one had then slipped down into the quarry. There were still traces of the ring cairn but at the centre of it nothing was evident. 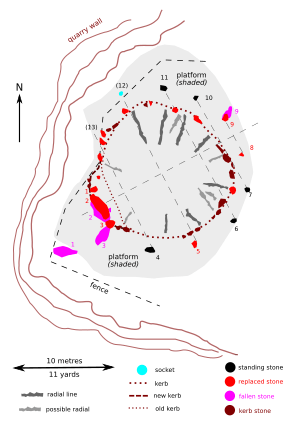 Diagram showing status of circle between 1999 and 2000

The excavation took place over the 1999 and 2000 seasons, not so much to carry out a complete excavation, but with the purpose of establishing the chronological history of the structure. It started with an accurate and detailed photogrammetric survey. The remit also included advising on how the stone circle could eventually be displayed for the public.

With the turf and surface soil removed it became clear that the interior of the circle was much better preserved than had been expected. The excavation showed that the hilltop had first been used for pyres and eventually this created a mound of burnt residues, including cremated human bones. This mound had later been surrounded with rubble and boulders to form a polygonal cairn and the rubble had been extended further outward to make a roughly level platform over the summit of the hill.

In the area of the central cairn the stones Coles thought were an inner kerb turned out to be merely incidental rocks cleared from the fields. The cairn was indeed in the shape of a hollow ring with a central court left clear of stones but no inner kerb had been needed because the slope to the top of the hill held the boulders in place. An outer kerb was uncovered which had originally been continuous although only 19 stones still remained in place. Seven radial lines of boulders were found lying like spokes dividing the cairn into segments. Where the ground was sloping steeply down to the southwest, terraces of turf and soil had been created, supported by boulders, to allow the cairn, faced on its perimeter with the kerb, to extend outwards in this direction in preparation for positioning the recumbent setting.

At the northeast of the circle six fragments of Beaker pottery were found beneath the outer platform by the base of the kerb and radiocarbon dating of charcoal from under the cairn beneath the original position of the recumbent indicated around 2500–2450 BC, early Bronze Age. Also, fragments of late Bronze Age plain pottery and worked stones, including six flint blades, were unearthed. Few traces were found of people living in the immediate area of the circle – few artefacts were found – although by the Bronze Age the Howe of Cromar area had been partially cleared for cultivation. Field-walking by the archaeologists discovered as many as 29 cup-marked rocks in the general vicinity. 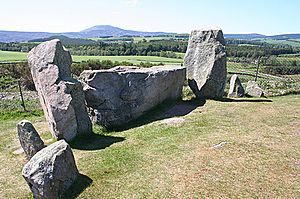 Once the ring cairn had been built the circle was constructed on top of the pre-prepared platform in a way that showed the cairn and platform had been deliberately designed to accommodate the stone circle. Moreover, the radial lines laid down before the uprights apparently tended to point to the places where the orthostats were later sited. The recumbent had been laid in a shallow hollow, supported with chock stones, and the orthostats had been lowered into sockets dug into the platform. Probably at the same time, the kerb of the cairn was reconfigured to turn outwards over the extended cairn to connect with the flankers and some large kerb stones were removed – those that had run beside the recumbent inside the circle. The orthostats seem to have been positioned in pairs to face each other at right angles to the axis through the recumbent. After the construction of the platform, cairn and stone circle, little seems to have happened until around 1000 BC from when there is again evidence of cremated bone fragments. In the 16th or 17th century AD a pit was dug in the middle of the cairn and the excavation found cremated bone here also. 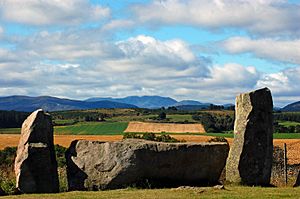 View over the repositioned recumbent stone to Lochnagar

The sockets of four of the missing uprights were found by the excavation – at the southeast (5), east-northeast (8), north-northwest (12), and under a fallen slab at the northeast (9). Orthostat 8 was found buried beside its socket and orthostat 5 was found in the quarry itself. This stone had fallen before 1870 and was missing in 1904 and yet it was found unbroken in 1999. These three stones, and the two flankers, were lifted by crane and lowered into their sockets which fitted well. The stone at the west (13) could not be found. The recumbent was turned and lifted back into place by crane. In its original position the recumbent was again precisely level

In 2003 part of the quarry was back-filled and the area was landscaped. When viewed from across the circle the recumbent, now restored to its original position, confirms Burl and Ruggles’ observation that the alignment points to the mountain Lochnagar. It is also the position where the full moon sets at midsummer at a time of minor lunar standstill though by 2013 Bradley was doubting the significance of this.

The excavation showed that the circle was of the early Bronze Age in date – about 2500 BC. This had previously been thought likely but not certain. What was not expected was that the stone circle was built after the cairn. Moreover the circle's eventual construction had been preconceived in the building of the cairn. In recent years there have been theories that people could have assembled within the circle to make astronomical observations and celebrations – this now seems most unlikely. Two more excavations were carried out subsequently on other stone circles and a similar order of construction was found. There remains some doubt whether the stages of construction took place over a "relatively short duration" or whether they took "many generations". It does not seem the monument was primarily for burials.

An archaeoastronomical theory has been that the alignment of these circles was for viewing astronomical events from within the circle. Because it had previously been thought the central cairns had been built after, maybe long after, the circle there would have been a space inside for people to congregate. Following Bradley's discovery that in this case, and others, the cairn predated the circle, it is now according to Ruggles "difficult, if not impossible, to observe the moon in the way we have described". There remains the idea that the alignment with Lochnagar on the far horizon was intentional but Henty remarks that the recumbent gets in the way of a view of the mountain from the opposite side of the circle.

All content from Kiddle encyclopedia articles (including the article images and facts) can be freely used under Attribution-ShareAlike license, unless stated otherwise. Cite this article:
Tomnaverie stone circle Facts for Kids. Kiddle Encyclopedia.