The Tongariro Northern Circuit, one of the New Zealand Great Walks, is a three- to four-day tramp in Tongariro National Park, New Zealand. The hike includes the Tongariro Alpine Crossing, a day's march that incorporates the Northern Circuit's most stunning scenery. The complete trail forms a 50 kilometres long loop trail that circumnavigates Mount Ngauruhoe. Approximately 7,000 trampers complete the walk each year. This compares to the approximately 25,000 who walk only the Tongariro Crossing section.

There are three New Zealand Department of Conservation (DOC) huts around the circuit - Mangatepopo, Oturere and Waihohonu. A fourth hut, Ketetahi, was damaged in the 2012 eruption and is now only a day shelter. It is forbidden to camp within 500 metres of the track.

The Northern Circuit is a round trip that can be walked either way. The tour below describes the clockwise route starting in Whakapapa Village. There is a car park and a DOC Visitor Center where information is available. There are other possible starting points from various road ends along the track.

Day One, 3–5 hours, 8.5 km. Starting the track at the Whakapapa Visitor Centre, it follows mainly the Whakapapa track over eroded plains. It crosses many smaller river beds and can be fairly muddy during rain. On the right side the cone of the volcano Mount Ngauruhoe is visible. The Mangatepopo Hut is 5 minutes off the main track.

Day Two, 5–6 hours, 9 km. This is the actual Tongariro Alpine Crossing. Starting gently up the Mangatepopo river valley it becomes a steep climb on magmatic rock. It continues through the South Crater up and over the side of Red Crater and down to the Emerald Lakes. During the walk there are views of the active volcanic scenery, weather permitting. At the Emerald Lakes, named after their colour due to minerals from thermal area, the track joins the route to Oturere Hut (1 hour 30 minutes). After the lakes, the route passes Blue Lake before descending down to Ketetahi Hut.

Day Three, 6–7 hours, 16.5 km. The day begins with a moderate climb back to Emerald Lakes then down a relatively steep descent to Oturere Hut. One can see many abstractly formed lava formations on the way. Passing Oturere Hut the track fades into field of gravel lacking vegetation. The day finishes with a valley crossing and ascent through forest, then a descent to Waihohonu hut. 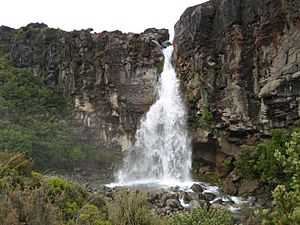 Day Four, 5½–6 hours, 14 km. The track follows an old pack route beside Waihohonu Stream without much climbing. On the way there are side trips to the Lower and Upper Tama Lakes (20 minutes and 90 minutes return), formed by water filled volcanic craters. Just before Whakapapa the Taranaki Falls form a 5-minute detour from the main track.

All content from Kiddle encyclopedia articles (including the article images and facts) can be freely used under Attribution-ShareAlike license, unless stated otherwise. Cite this article:
Tongariro Northern Circuit Facts for Kids. Kiddle Encyclopedia.