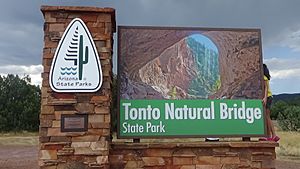 Tonto Natural Bridge is a natural arch in Arizona, United States, that is believed to be the largest natural travertine bridge in the world. The area surrounding the bridge has been made into a state park called Tonto Natural Bridge State Park, which is located off State Route 87, just 10 miles (16 km) north of Payson. Tonto Natural Bridge stands over a 400-foot-long (120 m) tunnel that measures 150 feet (46 m) at its widest point and reaches a height of 183 feet (56 m).

This natural bridge was first documented by David Gowan, a Scotsman, in 1877 while hiding from hostile Apache tribe members. Gowan was impressed by the location and persuaded his family to emigrate and live there. Gowan also tried to claim the land for himself under squatter's rights. David Gowan died in January 1926. When deputy sheriff Jim Kline on his regular two week's visit, couldn't locate Gowan at his little cabin, he looked around and secured the help of a posse, which found David's body in Deer Creek. The remains were buried just where they were found beside the creek.

Gowan family members lived near the bridge until 1948. Their lodge building survives to this day and is included in the National Register of Historic Places. In 1948, Glen L. Randall, a native of Pine, Arizona, purchased the Tonto Natural Bridge, the Lodge including 160 acres surrounding the natural wonder with his father Walter Randall and a brother owning a portion of it also. After Randall's death in 1967, his wife Eloise Kleinman Randall sold the property and it eventually was made into a State Park.

It was announced in early 2010 that the park was scheduled to close on June 3, 2010 because of budget cuts and to allow for repairs to the historic lodge. Three groups eventually donated funds to allow the park to stay open until the end of September 2011.

All content from Kiddle encyclopedia articles (including the article images and facts) can be freely used under Attribution-ShareAlike license, unless stated otherwise. Cite this article:
Tonto Natural Bridge Facts for Kids. Kiddle Encyclopedia.