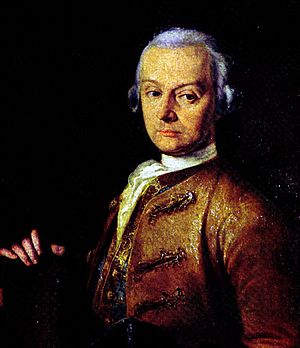 The possible composer of the work: Leopold Mozart, in 1765

The Toy Symphony (full title: Cassation in G major for toys, 2 oboes, 2 horns, strings and continuo) is a musical work dating from the 1760s with parts for toy instruments.

It was long reputed to be the work of Joseph Haydn, but later scholarship suggested that it was actually written by Leopold Mozart. Its authorship is still disputed, however, and other composers have been proposed as the symphony's true author, including Joseph Haydn's younger brother Michael Haydn, who purportedly contributed movements to the work.

Recent research on a newly found manuscript suggests the Austrian Benedictine monk Edmund Angerer (1740–1794) to be the author. If Angerer's manuscript (from 1765, entitled "Berchtolds-Gaden Musick") is the original, the Toy Symphony was originally written not in G but rather in C. These findings, however, are disputed among scholars. There is reason to believe that the true composer will likely never be known, in whole or in part, given its confused origins and the paucity of related manuscript sources.

There are other toy symphonies by (for instance) Bernhard Romberg (first published 1852) and Carl Reinecke (1895). British composer Malcolm Arnold wrote a modern Toy Symphony in 1957.

All content from Kiddle encyclopedia articles (including the article images and facts) can be freely used under Attribution-ShareAlike license, unless stated otherwise. Cite this article:
Toy Symphony Facts for Kids. Kiddle Encyclopedia.