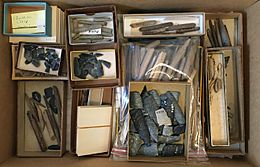 These artifacts from Helge Larsen's 1949-1950 excavations at the Trail Creek Caves Site are housed at the Danish National Museum in Copenhagen, Denmark. 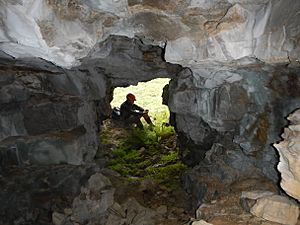 The Trail Creek Caves are a group of twelve caves found within the Bering Land Bridge National Preserve on the Seward Peninsula of the U.S. state of Alaska. This is a significant archeological site due to the discovery of several artifacts of ancient hunters. These included stone tools and bone fragments dated to 8,500 years or earlier. The caves were discovered in 1928 by Taylor Moto and Alfred Karmun, locals from Deering, Alaska. Geologist David Hopkins tested the site in 1948. This location was first excavated in from 1949-1950 by Danish archeologist Helge Larsen [da]. The caves are located along Trail Creek 65°47′28″N 163°24′58″W﻿ / ﻿65.79111°N 163.41611°W﻿ / 65.79111; -163.41611 near its mouth at Cottonwood Creek in the Northwest Arctic Borough.

All content from Kiddle encyclopedia articles (including the article images and facts) can be freely used under Attribution-ShareAlike license, unless stated otherwise. Cite this article:
Trail Creek Caves Facts for Kids. Kiddle Encyclopedia.