The Treasure Valuation Committee (TVC) is an advisory non-departmental public body of the Department for Culture, Media and Sport (DCMS) based in London, which offers expert advice to the government on items of declared treasure in England, Wales, and Northern Ireland that museums there may wish to acquire from the Crown.

The terms of reference of the TVC are laid down in the Treasure Act 1996 Code of Practice, which also details the principle of reward payments to finders and landowner for finds of Treasure which are acquired by museums. The TVC recommends to the Secretary of State the value of treasure finds which come before it, and also makes recommendations on the allocation of rewards and abatements of rewards where circumstances require. Minutes of its meetings are published on the website of the Portable Antiquities Scheme, after all of the cases discussed therein are concluded. The TVC meets at the British Museum but is independent of the museum. 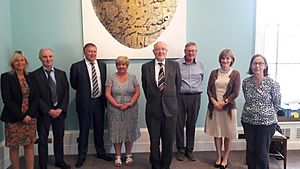 Members of the Committee are appointed by ministers in the DCMS. Terms of service are currently five years in length, with the possibility of renewal for a total length of service of 10 years. Members are not paid for their service. 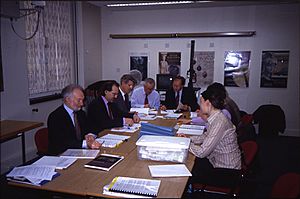 The Treasure Valuation Committee at work.

Well-known finds that have been valued by the TVC include the Ringlemere Cup, Vale of York Hoard and the Staffordshire Hoard.

All content from Kiddle encyclopedia articles (including the article images and facts) can be freely used under Attribution-ShareAlike license, unless stated otherwise. Cite this article:
Treasure Valuation Committee Facts for Kids. Kiddle Encyclopedia.