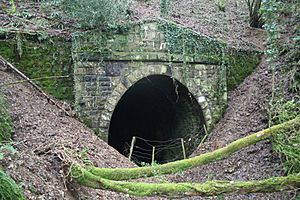 North portal of tunnel at Trelill

The Trelill Railway Tunnel was built in 1895 and formed part of the North Cornwall Railway network, which ran the Atlantic Coast Express to London, between Wadebridge and Camelford. It is the only tunnel along this route.

The tunnel length is 333 yards (304 m) and is built as a curve and a decline down to St Kew Highway and runs right under the village of Trelill. The tunnel served to take the line below the village of Trelill, so allowing a more direct route between Halwill in Devon and Padstow in Cornwall. The line closed on 3 October 1966 as part of Dr Beeching's railway cuts.

All content from Kiddle encyclopedia articles (including the article images and facts) can be freely used under Attribution-ShareAlike license, unless stated otherwise. Cite this article:
Trelill Tunnel Facts for Kids. Kiddle Encyclopedia.