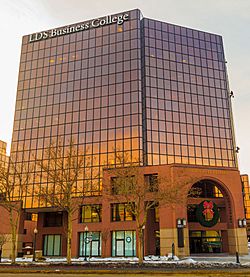 The LDS Business College tower at the Triad Center.

The Triad Center is a complex of office buildings in downtown Salt Lake City, Utah, United States. Originally planned as a large development, containing several office and residential buildings (including the tallest buildings in Utah), the project was canceled after only two phases were completed. It currently houses BYU–Pathway Worldwide, LDS Business College, the BYU Salt Lake Center, offices of the Deseret News and the studios of KSL-TV and KSL Radio. The landlord and prominent tenants are affiliated in one way or another with The Church of Jesus Christ of Latter-day Saints.

Ground was broken for construction of the center on 1 June 1982, by Essam Khashoggi, chairman of Triad America. On the same day, plans for the 10-year-long development were publicly released. They called for the construction of a 26-acre (0.11 km2; 0.041 sq mi) complex with a set of twin 40-story office towers, three 25-story residential towers, a hotel, farmers' market, ice rink, amphitheatre and a park. The complex was to be located on three city blocks in downtown Salt Lake City, and was planned to contain over 1,940,000 square feet (180,000 m2) of office space and 1,430,000 square feet (130,000 m2) of residential space.

The first phase of construction was to last 18 months and to include construction of a broadcast house to hold the studios of KSL radio and television. The second phase was the construction of a 10-story office building, on the northern boundary of the project, known as the North Plaza Office. These buildings were to be constructed surrounding the historic Devereaux House, whose restoration was to be included in the project. On 12 July 1984, the broadcast house was officially opened, and the North Plaza Office building would soon be completed.

During the years following the initial announcement of the development, plans for the remaining phases were scaled back. On 7 June 1985, ground was broken for the first 35-story office building (originally planned to be 40-stories), to be known as 1 Triad Center. 1 Triad Center was the last phase to go into construction, as financial problems put the remaining phases on hold. Excavation for its basement was begun, and steel for the skyscraper was delivered on site, but construction was soon halted. Within a year, the entire development was canceled, leaving only the Broadcast House, North Plaza Office and a parking structure completed. Had 1 Triad Center been completed it would have been the tallest building in Utah.

The Triad Center is owned by Utah Property Management Associates, a subsidiary of Deseret Management Corporation, the for-profit wing of The Church of Jesus Christ of Latter-day Saints. It was purchased by Zions Securities in 2004 from M&S Triad Center, for an undisclosed amount. The center is located across the street from The Gateway and Vivint Smart Home Arena and is near the City Creek Center development and Temple Square.

The following are current tenants of the complex:

In August 2010, Deseret News announced it would be moving its offices to the broadcast house in the center, so they could integrate with KSL's newsroom.

On 2 August 2017, BYU–Pathway Worldwide announced that the Triad Center would become its new headquarters.

All content from Kiddle encyclopedia articles (including the article images and facts) can be freely used under Attribution-ShareAlike license, unless stated otherwise. Cite this article:
Triad Center Facts for Kids. Kiddle Encyclopedia.