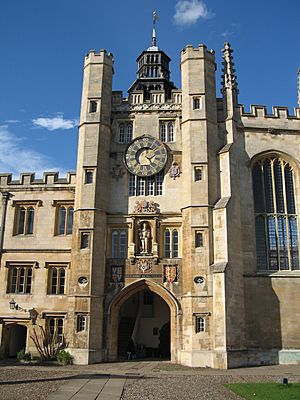 King Edward's Gate, in Trinity Great Court, otherwise known simply as the clock-tower, is one of the oldest buildings in the college. The first clock appears to have been installed in 1610 by Thomas Tennant, of London. The bell has survived to this day and bears the inscription: TRINITAS IN UNITATE RESONAT 1610. RICARDUS HOLD FELD ME FECIT.

In 1726 – 1727 the clock mechanism was given to the village of Orwell, Cambridgeshire when the master, Richard Bentley, provided a new clock and dial plate and three bells. It is noted for striking the hour twice, first on a low note (the 'Trinity' chime) and then a higher one (the 'St John's' chime).

In 1910 this eighteenth-century clock was replaced with a mechanism by Smith of Derby to a design by Lord Grimthorpe.

The clock is governed by a temperature-compensated pendulum 2 metres in length driven by a three-legged gravity escapement. It is a remarkable instrument, capable of keeping time to better than one second in a month without any intervention. 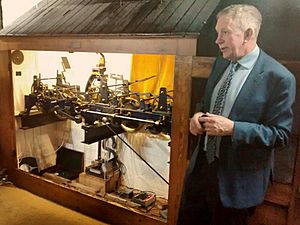 The Trinity College Clock mechanism and the Keeper of the Clock, Dr Hugh Hunt in February 2019

The clock is the subject of a current project coordinated by Dr Hugh Hunt, Fellow of Trinity College Cambridge, calibrating it against the National Physical Laboratory time signal and other variables, including the amplitude of the pendulum, humidity, air temperature, air pressure, and air density.

All content from Kiddle encyclopedia articles (including the article images and facts) can be freely used under Attribution-ShareAlike license, unless stated otherwise. Cite this article:
Trinity College Clock Facts for Kids. Kiddle Encyclopedia.