Trinity Court Building is the name of several structures located at 70, 74, and 76 Trinity Place in Lower Manhattan, New York City, between Rector and Albany Streets.

Western Union sold it in 1888. The building was the focus of a complex tort in the 1890s over property value loss due to the operation of the Manhattan Elevated Railroad (later IRT Sixth Avenue Line) in front of it. The builder (Western Union) and the defendant (railway) were both controlled by the same group of investors, who were asserted to be in collusion against buyer Augustus D. Shepard to nullify any damages collected. Mutual Life Assurance foreclosed on the building in 1914, and auctioned it to Alliance Realty. It was sold in 1919 to Frazar & Co, which was believed to have had plans to replace it with a new skyscraper. 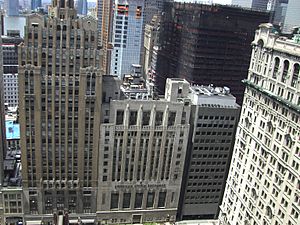 Not long after its completion, the Irving Trust began started construction on the Irving Trust Company Building at the corner of Wall Street and Broadway, visible from the Trinity Court Building. The builder commissioned a time study of the construction process. Eight images from that study have been preserved at the Canadian Centre for Architecture.

Trinity Church, which owns the site, had its offices and preschool in the 1927 building. In 2015, the church faced a choice of a $33 million renovation to bring it up to code, or to replace it with a new building at a cost of about $35 million. The vestry decided on the latter and tore the structure down. In its place, it planned to construct a new building with an address of 68-74 Trinity Place.

Originally, 310,000 square feet (29,000 m2) of primarily luxury condominiums with a modern glass facade was planned. Due to community opposition the plans were changed, with a smaller commercial building incorporating community-friendly uses. The new design also uses bronzed aluminum to better fit in with the church and a preserved footbridge from the previous building, and incorporates stained glass and terra cotta embellishments salvaged form the 1927 edifice. The third building, known as Trinity Commons, topped out in 2018 and will open in 2021.

All content from Kiddle encyclopedia articles (including the article images and facts) can be freely used under Attribution-ShareAlike license, unless stated otherwise. Cite this article:
Trinity Court Building Facts for Kids. Kiddle Encyclopedia.